Pateychuk moved a step closer to securing the much sought after Triple Crown of poker after winning a fascinating and exciting World Poker Tour (WPT) Prague main event. 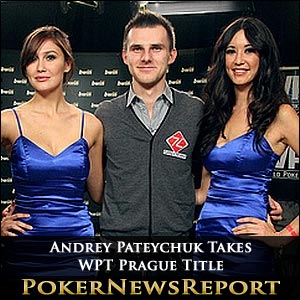 Pateychuk has enjoyed a fantastic last six months, adding this Prague victory to the $478,174 he collected for his 15th place finish at the World Series of Poker (WSOP) main event, before then taking the European Poker Tour (EPT) San Remo for $937,530 back in October.

To have secured WPT and EPT titles when so young suggests there could soon well be a Russian joining the quartet of Jake Cody, Bertrand ‘ElkY’ Grospellier, Gavin Griffin and Roland De Wolfe in what is a very exclusive Triple Crown club – all he needs is that WSOP bracelet.

However, he was to be eliminated in third place for $212,690, while second placed Balaguer picked up $320,381, $139,999 went to Frenchman Benjamin Pollak in fourth, $107,691 was handed to Norwegian Sigurd Estelad, and Canadian Russell Carson left the Kings Casino in the Corinthian Hotel with a cheque for $84,807.

It looked certain that Balaguer was destined to become a WPT champion, but the young Spaniard appeared to get overexcited as the finish line approached.

Pateychuk, with K♠ J♣, went all-in for 1.5 million and Balaguer – with visions of lifting the trophy possibly running through his mind – made a call with 10♦ 9♠ to double-up his Russian opponent and also open the door for an unlikely comeback.

That comeback became much more likely on the next hand when Pateychuk found big slick to again double-up through Balaguer, who held A-Q, to move level with the young Spaniard.

The Russian continued his rise to move into the chip lead, only for Balaguer to then gain his own huge double-up.

Balaguer went all-in while holding J♣ 4♣ after Pateychuk had raised to 500,000 with his hole cards of A♥ K♦. The latter called the former’s all-in, before Balaguer received two jacks on the flop to regain the chip lead.

However, Pateychuk took down a massive hand not long after when moving all-in while holding A♠ 6♣. Balaguer, with A♥ J♣, called to be a massive favourite – so much so that WPT officials began preparing to give the Spaniard the trophy for winning the event.

But Pateychuk was dealt a six on the flop – and that incredible turnaround demolished Balaguer’s chip stack as well as his confidence.

With river cards playing such an important role in this heads-up encounter, it was not at all surprising that the final hand brought more drama.

Holding pocket queens, Balaguer went all-in and was called by Pateychuk, who had A♥ 5♠.

A 9♠ 7♠ 4♠ flop arrived and Pateychuk held one spade to have the chance of a flush. The 3♥ arrived on the turn to hand Pateychuk some more outs, while the 2♣ on the river supplied the Russian with a straight to make him WPT Prague champion.

The final day saw short stack Carson eliminated first in sixth place. In the small blind, the Canadian went all-in for his last 545,000 and was called by big blind Kretz.

But Kretz was to suffer his own bad beat not long after when he had Balaguer dominated with his K♥ K♠ against the Spanish star’s 6♥ 6♦.

However, Balaguer survived to fight on following a board of 8♣ 7♠ 3♦ 9♣ 10♣ that gave the Spaniard a straight.

Next out was Eskelund – the WSOP $2,500 buy-in World Championship Mixed Events 8 Game – when the Norwegian lost out to Pateychuk.

Eskelund had moved all-in with K♦ Q♥ to be faced by Pateychuk’s J♦ J♥. The Q♦ put Eskelund way out in front, but Pateychuk found a jack on the river to eliminate Eskelund in fifth place.

Pollak also had no great amount of good fortune at the final table. His troubles really began after a A♠ 4♠ 2♠ flop arrived while he held J♠ 10♠. Balaguer was again involved and held A♦ 7♠.

The 7♥ turn and 7♣ river gave the Iberian player a runner-runner full house to chop Pollak’s chip stack by about two million while in the process sending him flying up the rankings.

Parisian Pollak never recovered from that and was soon out in fourth place. Having again gone all-in, this time with J♠ 9♣, Balaguer again made the call while holding A♣ 10♦.

The J♣ 7♠ 4♦ flop had Pollak in front, but the K♦ and Q♠ runner-runner gave Balaguer a straight to send the Frenchman to the rail.

Now three-handed, Kretz struggled somewhat against two more experienced opponents – and in one hand lost two million to Pateychuk after a failed bluff.

The German was exiting the event in third place soon after, with Pateychuk again getting the knockout on the river.

The Russian, on the button, raised, small blind Kretz went all-in and Pateychuk made the call.

Pateychuk revealed A♥ 6♦, while Kretz showed 9♥ 9♣ to be in front. With no cards helping either player on the flop and turn, it was the A♠ on the river that did for Kretz – and we now had our final two players.

Starting pretty well level on chips, Pateychuk was to eventually overcome Balaguer for title glory – and possibly a shot at the Triple Crown come next summer in Las Vegas.

Top 10 placings and payouts from the WPT Prague Main Event