Day 3 of the record-setting World Poker Tour (WPT) Prague was dominated by Germany’s Stanislaw Kretz during what was a great weekend for the European nation. 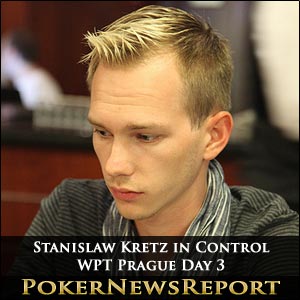 Day 3 of the record-setting World Poker Tour (WPT) Prague was dominated by Germany’s Stanislaw Kretz during what was a great weekend for the European nation.

Day 2 had started with Slovenian Casey Kastle as chip leader from 124 players, but it was England’s Martins Adeniya who ended the day on top with 849,000 chips as the 62 survivors eyed up the winner’s cheque of $630,263.

But, by the close of play on Day 3, Kretz was in control, holding 6.3 million chips to be almost 1.5 million ahead of second placed Frenchman Benjamin Pollak (4,865,000).

Kretz was on the move again not long after, but chip leader Adeniya was the target this time.

Kretz had hit a backdoor flush draw, with Adeniya paying him off as the German took control of the final table.

Earlier in the day, American Zachary Korik was eliminated in 10th place for $27,126 when he lost out to Pollak.

As no ace arrived on the board, Korik was out as Pollak moved up to second place on 2,800,000 chips.

Balaguer immediately made the call to create a side pot of 140,000 with Pateychuk, while Watson had the opportunity to triple-up.

That was enough for Balaguer as he folded, while Pateychuk turned over A♠ J♦, only for the Spaniard’s face to clearly show that he had folded a better hand.

Watson, on the other hand, turned over 10♦ 7♣, with the Q♦ signifying his demise and exit in ninth place.

Eighth place and $44,423 went to dynamic Dane Frandsen. Now the short stack, Frandsen went all-in in successive hands from the button and the cut-off seat.

His first shove was successful, but the second received a call from chip leader Kretz. Frandsen’s tournament life was in great danger as he revealed A♠ 5♦ to be met by Kretz’s A♦ Q♠.

Slovakian Bendik exited the tournament in seventh place as the final elimination of Day 3 for $64,615.

Pollak, in the cut-off, raised to 100,000 and small blind Kretz three-bet to 240,000. It looked like a battle between two big stacks was upon us, but big blind Bendik then turned to one of the other short stacks in Carson to ask: “How much do you have?”

However, Carson walked from the table, leaving Bendik to take a quick look at his own stack before going all-in.

Pollak folded, but Kretz called to show 5♣ 5♦, while Bendik revealed 10♥ 10♠ to the sound of a communal sigh at the table.

However, the table was soon silent as the 5♥ appeared on the flop to give Kretz trips. The K♦ 4♦ Q♣ K♠ followed thereafter and Bendik became a rather unfortunate casualty.

Saturday’s Day 2 saw Slovenian Kastle start out as chip leader on 356,800 as 124 remaining players eyed up the top prize.

However, it was England’s Adeniya who ended the day on top with 849,000 in chips as 62 players hit the rail.

Adeniya started the second day in determined mood as he eliminated Sweden’s Michael Tureniec during the second level.

Adeniya called to show aces, while Tureniec showed K-Q and could not improve following the flop, turn and river to exit.

But that elimination saw Adeniya climb up to 310,000 in chips – and he continued to add to his stack throughout the day to end it as chip leader.

The money bubble when Russian Yury Gulyy crashed out in 64th place. The action had folded to small blind Frandsen and he moved all-in for 113,000. Big blind Gulyy called, although his stack was only 90,000.

Frandsen showed A♠ 6♦, while Gulyy dominated with his A♥ K♠ and looked poised to double-up.

However, the flop showed A♣ 6♣ 3♥ to give Frandsen two pair and, when the J♣ turn and 6♠ river failed to help Gulyy, the Russian was the official bubble boy, meaning every surviving player was guaranteed at least $8,615.

Follow Poker News Report for the latest poker news on the WPT Prague.