It was appropriate that home star Jan Ramik topped the leaderboard as the Prague Poker Festival kicked off with the first ever World Poker Tour (WPT) Prague. 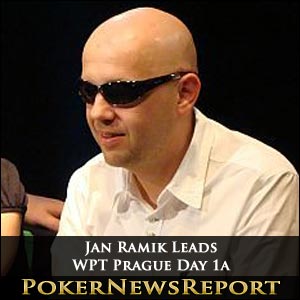 It was appropriate that home star Jan Ramik topped the leaderboard as the Prague Poker Festival kicked off with the first ever World Poker Tour (WPT) Prague at the city’s Corinthia Casino.

But it was Ramik who made the biggest moves to take top spot following 10 one-hour levels of play, although there is a good chance some of Day 1a’s casualties – such as Sam El Sayed, Shannon Shor, Toby Lewis, Melanie Weisner and WPT Player of the Year Andy Frankenberger – will take advantage of this being a re-entry event to return on Saturday.

Incredibly, Ramik chipped up from his starting stack of 30,000 to more than double that before the 100/200 level was completed, although El Sayed was the first player to hit the 100,000 mark before crashing out.

On a board that showed 9♠ 6♥ 9♣ 2♦ and a 15,000 pot already made, El Sayed made a raise of 6,000 over his opponent’s 4,000 bet. The Swiss player’s opponent called, before the river provided the players with the Q♦. El Sayed’s opponent checked, only for the Swiss star to go all-in. His opponent took his time and then folded, but what followed was rather amusing as both players discussed the hand. El Sayed’s opponent said: “What did you have?” El Sayed answered: “A full house and you?” Then came: “I had aces.”. El Sayed found this hilarious and added: “That’s the funniest thing I have ever heard. Your aces were good.” His opponent looked puzzled before saying: “You said you had a full house,” to which El Sayed replied: “Never believe a poker player.”

However, El Sayed wasn’t laughing when he was sent to the rail later in the day as Spain’s Adria Balaguer took over at the top. In the big blind, Balaguer placed 4,100 into the pot following a flop that read 8♦ 7♠ 4♥. Frenchman Jerome Barr, in early position, made the call. The 3♠ arrived on the turn and both checked to see the 6♠ on the river. Balaguer threw 6,100 into the pot and Barr, after checking his cards, mucked. However, hitting 155,000 at the start of level 10 was as good as it got for Balaguer as he dropped back down to fifth place on 154,000 chips come bagging-up time.