The WPT touched down in Florida this week for it’s seminal event in the State, the WPT Seminole Hard Rock Showdown. Taylor Von Kriegenbergh wins $1,1 million. 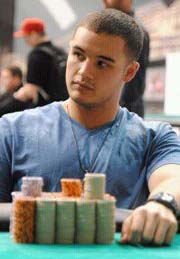 The World Poker Tour touched down in Florida this week for it’s seminal event in the State, the WPT Seminole Hard Rock Showdown. This also marked the only US stop where 18-20 year olds were allowed to participate. A large turn out of 426 poker players exchanged $10,000 for 30,000 tournament chips and the opportunity to become a millionaire.

Whittled down to a final six, the last remaining players were a mixed bag of local amateurs and seasoned professionals. After 77 hands American Tommy Vedes was the first of the final six to leave. The former 2009 WPT Festa al Lago winner lost out to Curt Kohlberg when he pushed all in, but still took home $166,272 in prize money.

Another 22 hands later and Allen Bari found his luck was out. The well-known grinder, it seems, has a sharp eye and even sharper tongue. Shortly after Vedes departure Bari tweeted: “5 handed with 2 nits a clown and a question mark. Gonna try grind back to 1.3 mill.” However his target was never reached. Pushing all in with Ad Td he found himself squaring off against Justin Zaki and his 5c 5h. With a Qs 4s 4c on the flop, a Jd on the turn and a 5s on the river, Bari had to content himself with a fifth place finish. It seems even taking away $211,997 was not enough to stop a fresh outpouring of verbal abuse against his fellow players. The Twitter page soon read: “Thank you for all the support..Card dead for 6 hours watching morons smash buttons..Gl Taylor, the rest can rot in hell..”

97 hands later, and it was almost all over for eventual winner Taylor Von Kriegenbergh. He pushed all in with 7c 6c, but was countered by Justin Zaki who held Ad Js on the big blind. The Ks Td Th flop meant things were still looking positive for Zaki, but the 6h on the turn gave Von Kriegenbergh the pair he needed. The 5d on the river sealed the deal for him and sent Zaki to the rail with $415,680 for 3rd place.

Von Kriegenbergh had remained chip leader throughout most of the day, and now held a stack of 11,125,000 to Kohlberg’s 1,850,000. Kohlberg was the more experienced player, having sat at a WPT final table five times before, but he was fighting hear impossible odds to overcome the void between the two stacks. Just eight hands into the heads up phase, Von Kriegenbergh moved all in with Qc 8d, and was immediately called by Kohlberg who held As Tc. With the final board producing Qs 4s 4d Kh Qh, Kohlberg had to resign himself to second place, while Von Kriegenbergh was crowned the WPT Seminole Hard Rock Showdown Champion.

The final table payout positions were as follows: