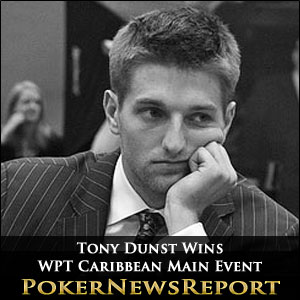 There was a novel twist to the result of the WPT Caribbean this weekend, when Tony “Bond18” Dunst won the Main Event at the Casino Royale (where else?) in St Maarten, after he had lead throughout almost all of the final table.

Dunst is the voice on TV´s “Raw Deal” program, and he had taken the chip lead to the final table after busting out Day 2 chip leader Thomas Laviano and Jean-Nicolas Fortin in the final hands of Day 4. However, he faced no easy task at the final table, as two former WPT Champions Giacomo Fundaro and Marvin Rettenmaier were also chasing the $145,000 first prize.

Dunst Delivers his own Raw Deal

When the final table of the WPT Caribbean Main Event got underway, blinds were 6,000/12,000 with a 2,000 chip ante, but the short-stacked players seemed happy to let the big guns battle out the early hands. Severin Schleser (A♠ K♥) took a temporary lead in the chip counts when rivering the K♣ to best Marvin Rettenmaier´s pocket Queens, but Tony Dunst was soon back in charge after busting Robbie Bakker in a hand which would definitely feature of Dunst´s “Raw Deal” program.

Bakker A♥ A♠ for a set of Aces

Bakker was out in sixth place, while Tony Dunst moved back into the chip lead with 2,450,000 chips.

The first move by one of the short-stacks was when Giacomo Fundaro doubled up against Tony Dunst J♦ J♠ > A♦ K♣, but Zoltan Purak was not so fortunate when his attempted double-up with 8♣ 8♦ ran into Dunst´s A♣ Q♣, and Dunst rivered the Q♦ to eliminate Purak in fifth. A long passage of play then followed without a major incident until Marvin Rettenmaier moved all-in from the small blind with J♥ 8♥ was called by Severin Schleser (A♦ J♠) and the A♠ was dealt on the flop to eliminate the former Champion in fourth.

The final table was set when Schleser moved all-in on Tony Dunst with A♣ Q♦ and Dunst rolled over the A♠ K♣. Schleser needed a Queen to stay alive in the WPT Caribbean Main Event, but the window card K♥ virtually sealed Dunst’s win in the hand and, with no help from the board, Severin Schleser was bust from the tournament in third – Dunst carrying a chip advantage of 4,794,000 chips -v- 937,000 chips into the heads-up against Giacomo Fundaro.

Fundaro Battle Back, but Dunst Prevails

The conclusion to the WPT Caribbean Main Event came five hands later, when Tony Dunst moved all-in with J♦ 2♥ and Giacomo Fundaro made the call with K♥ 3♥. Dunst paired both his Jack and his Deuce on the flop of J♠ 9♦ 2♠ and – with the 6♠ on the Turn and 6♥ on the River – there were no comeback surprises in store for Fundaro. Tony Dunst´s winning hand may not have been as dramatic as Daniel Craig´s straight flush in the 2006 remake of Casino Royale, but he looked a dam sight happier!