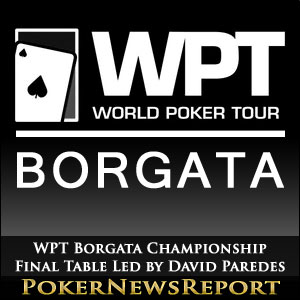 Following Wednesday´s fourteen-hour marathon session, there was another long day at the Borgata Poker Rooms yesterday, as it took more than twelve hours to whittle the thirty-six players who took their seats at the start of play down to a final table of six.

At the close of play, David Paredes holds a narrow chip lead over Anthony Maio, with WPT Jacksonville winner Jared Jaffee sitting in third position overnight ahead of Day 3 chip leader Farid Jattin, the rather fortunate Robert Murello back in fifth and the practically anonymous Vladislav Mezheritsky in sixth.

Day 4 Starts with a Rush of Eliminations

Few would have forecast that it would take a twelve hour session to reach the final table of the WPT Borgata Winter Poker Open Championship during the first few levels of Day 4, when a significant number of players were eliminated from the event.

Bryan Choi was responsible for the first KO of the day when his A♥ 10♣ turned a pair of Tens to best Anthony Bellino´s pocket Deuces, and Bellino was quickly followed by Joseph Ruff (A♥ Q♠ < Justin Lunin-Pack´s A♠ K♠), John Holley (Q♥ 4♥ < Matthew Parry´s Q♠ Q♣) and Joe Serock, whose K♦ Q♠ failed to improve past Frank Toscano´s A♥ Q♦.

Maio and Murello Start to Climb – Jaffee Moves Ahead

As the eliminations continued, Anthony Maio and Robert Murello started to improve their positions. Maio accounted for Michael Weber A♥ K♠ > J♥ 10♦, while Murello came from behind to send Aditya Prasetyo to the rail K♣ J♥ > A♥ 4♦.

Overnight chip leader Farid Jattin fell from the top of the leaderboard when declined to call Katayon Khaterzai´s post-River bet and lost 240,000 chips, and it was Jared Jaffee who temporarily took control of the WPT Borgata Championship Event with the dual KO of Matthew Parry (2♥ 2♣ > 8♣ 7♣) and Chad Brown (A♣ J♣ > K♦ 8♦).

With big pay jumps starting to kick in, the pace of the game slowed down. Anthony Maio moved up to the top of the leaderboard after eliminating Faraz Jaka K♣ K♦ > Q♠ J♠ on a Queen-high board, but Farid Jattin soon regained top position when busting out Byron Kaverman A♠ J♦ > 8♦ 9♦} after Kaverman had missed all his outs on the flop of 10♦ 10♠ 7♥.

And Then Came Paredes

Just before the WPT Borgata Championship was reduced to two tables, David Paredes had been among the “also-rans” as far as prominence in the event was concerned. However, after busting out Kalyan Gullapalli 9♦ 9♥ > A♦ 7♥ (courtesy of a rivered 9♠) we went on a heater.

After forcing Anthony Maio out of a 600,000 pot, he took another 2.5 million pot from Maio and Bryan Choi with post-flop aggression, and then bust Choi in ninth when his pocket Queens held against Choi´s A♦ Q♦ to finish the day with 9,650,000 chips.

Looking Ahead to the WPT Borgata Championship Final Table

The day came to a close when Farid Jattin´s A♦ 6♦ held against Justin Lunin-Pack´s Q♦ J♦ to eliminate Lunin-Pack in eighth position, and Kunal Patel saw his Aces cracked by Anthony Maio´s turned set of Deuces – sending Patel to the rail in seventh place and enabling Maio to move up within two big blinds of the chip leader.