The £100,000 buy-in WPT Alpha8 London was won last night by Philipp Gruissem after the conclusion to the valuable event was dominated by German poker players. 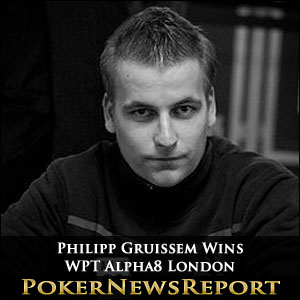 The £100,000 buy-in WPT Alpha8 London was won last night by Philipp Gruissem after the conclusion to the valuable event was dominated by German poker players

Philipp Gruissem made up for the disappointment of finishing third in the recent WSOPE High Rollers, by dominating the final six-handed table on his way to collecting the £862,400 first prize. Gruissem´s situation had seemed perilous at the start of Day 2 – having added only 10,300 chips to his starting stack of 100,000 on Day 1, but an early double up against Fabian Quoss (A♦ K♣ > A♣ J♦) enabled him to remain competitive as the blinds rose.

The dual eliminations of Victor Blom and Richard Yong enabled Philipp Gruissem to take the chip lead as the game went six-handed, and a massive pot that saw the elimination of Tony G on the bubble of the event propelled him into a substantial chip lead that he only briefly relinquished during the heads-up against Scott Seiver on his way to taking down the WPT Alpha8 London.

Setting the Scene for Day 2 of the WPT Alpha8 London

When play resumed at the Palm Beach Casino in Mayfair, there were eleven survivors from Day 1 headed by Tobias Reinkemeier, who held a substantial chip lead over Fabian Quoss and Tony Guoga. Registration was still open for another two levels and, as expected, Bill Perkins jetted in from the States to compete in the event.

However, before Perkins had taken his seat, the two shortest-stacked players had already bust from the event – David Silverman´s pocket Deuces coming second to Fabian Quoss´ pocket Tens, and Talal Shakerchi´s A♣ K♠ failing to improve past Igor Kurganov´s 10♠ 10♦. With the final entries set at twenty, it was determined by tournament director Matt Savage that only the top 4 players would cash in the event.

Bill Perkin´s participation in the WPT London Alpha8 event lasted less than one level – busting out after shoving with A♠ 6♠ into Victor Blom´s A♥ K♦ – and he was quickly followed by Fabien Quoss, who was unfortunate to see his K♠ K♥ beaten by Richard Yong´s 7♠ 7♣. Victor Blom was crippled by Scott Seiver (J♣ J♠ > A♦ K♥) before being eliminated by Philip Gruissem (Q♦ 3♣ > 10♦ 7♣) and, when Gruissem flopped a straight to send Richard Yong to the rail (Q♥ J♥ > A♠ 7♠), the final table of six was set.

The two players who were going to leave the game before the money were Max Altercott and Tony Guoga. Altercott was particularly unlucky to bust out to Scott Seiver (A♥ Q♥) after getting the last of his chips in with A♠ 9♣ and seeing the 5♥ A♣ 9♠ dealt on the flop (to give him two pairs) – the J♥ and 3♥ completing the board and giving Seiver a heart Flush.

However, players had to witness another Guoga hissy fit after he got all-in with 7♣ 7♦ against Philipp Gruissem´s Q♥ Q♠ and missed all his outs after the flop of 8♠ 9♠ 10♣. Gruissem chipped up substantially in that hand, as Scott Seiver had initially called Guoga´s shove and then folded when Gruissem came in over the top. Consequently Gruissem had four times as many chips as any other player when the game went four-handed.

With blinds going up to 6,000/12,000 (ante 2,000), and coming around quicker as the game went four-handed, Igor Kurganov had to act quickly to protect his tournament life. Unfortunately he chose the wrong minute to shove with 4♣ 4♥ and was called by Tobias Reinkemeier (A♦ J♦) who flopped the A♣ to eliminate his compatriot from the table.

Reinkemeier´s enhanced chip stack was devastated a few hands later when Scott Seiver doubled through him A♠ 2♣ (flopped a wheel) > J♣ 3♣ (turned two pairs) and Reinkemeier was eventually eliminated from the WPT Alpha8 London when his A♥ 3♠ failed to improve past Philipp Gruissem´s 4♠ 4♣ – Gruissem taking a 1,257,000 to 742,000 chip advantage over Scott Seiver into the heads-up.

Seiver Fights Back, but Gruissem Prevails

Several small pots enabled Scott Seiver to chip away at Philipp Gruissem´s advantage and, at one point he took a narrow lead against the German. However, Gruissem rivered a Full House and then got three streets of value with a paired Jack to snatch back the advantage. Scott Seiver battled back and was virtually on terms with Gruissem once again when the two players got into a pre-flop raising war which saw Seiver all-in and Gruissem just about covering him.

The flop of 9♠ J♥ 4♠ put the German comfortably ahead in the hand, but gave Seiver some additional outs. Unfortunately for the American, the board was completed by the 5♦ and 4♥, giving Philipp Gruissem the WPT Alpha8 London title and first prize of £862,400.