The World Poker Tour (WPT) has announced that two more cities, London and Johannesburg, would play host to its Alpha8 series. 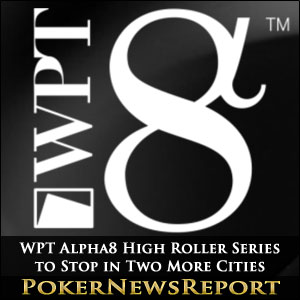 The World Poker Tour (WPT) has announced that two more cities, London and Johannesburg, would play host to its Alpha8 series.

Alpha8, a super high roller poker tour, has been gathering a lot of momentum and interest over the past few months, and it is set to be maintained after this announcement.

The London leg of the series is set to be a £100,000 (around US$161,000) buy-in event, and will get underway on October 28 at the Palm Beach Casino. The tournament is set to go for two days and will be broadcast on the Fox Sports 1 channel.

Johannesburg’s stop won’t have as big a buy-in, with the price to play being at ‘only’ $100,000. That event is set to take place on February 14 next year at the city’s Emperor Palace Hotel and Casino Resort. Like the London leg, the Johanneburg event is also set to go for twos day and will also be shown on Fox Sports 1.

WPT President Adam Pliska said that the reputation and history of both London and South Africa in the game of poker make them exciting places for the Alpha8 series to be held. He said:

We are very excited to name London as the second stop for our new Alpha8 series,

With its long-standing reputation as one of the world’s premier cities and financial capitals, London offers all of the amenities any high-stakes poker player could possibly desire. Its combination of culture, fine dining, nightlife, and enthusiasm for high-stakes poker make it the perfect venue for a unique event such as Alpha8.

Mr Pliska’s comments were welcomed by , Managing Director of London Genting Casinos UK Ltd Tony Pearce, who said he expected a wide variety of high stakes cash games to be played while the event was being staged in London.

Hosting WPT Alpha8 suits the exclusivity of both the tour and the Palm Beach Casino, he said. We are extremely excited with the expected high-stakes cash games surrounding the event, which will be bigger than anything seen before in London and which will recreate the famous big game held in Macau.

Mr Pliska also expressed his excitement at Alpha8’s future stop in Johannesburg, saying that the calibre of casino where the event would be held would help make it a memorable series.

South Africa is home to one of the most enthusiastic poker communities anywhere, and the gorgeous Emperors Palace Casino is truly a one-of-a-kind gaming destination, he said. The resort offers everything the discerning, high-stakes player wants, whether its world-class poker or the chance to enjoy an unforgettable vacation in one of the world’s most beautiful and exclusive destinations.