WPT Alpha 8: Gruissem does it Again 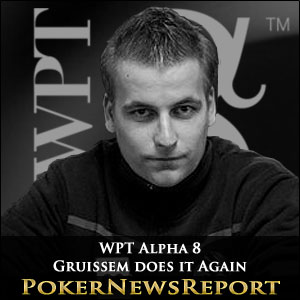 The Alpha8 is a series of – you guessed it – eight exclusive super-high roller events. The brainchild of the WPT, the Alpha8 pays homage to today’s top professional poker players and their willingness to play for increasingly higher stakes.

The third stop on the tour featured a $100,000 buy-in and rebuys. In total 28 entries were paid, bringing the total prize pool to over $2.7 million. Not bad for a glorified SNG.

Sixteen players returned for Day 2 action, but only five of them would be lucky enough to make the money. Of the remaining runners, there was not a fish in sight, meaning that the winner would have to either be truly deserving, or extremely lucky.

Steven Silverman, winner of the first WPT Alpha8 event, finished on the final table bubble in ninth when his A♣2♣ couldn’t outdraw the 4♣4♦ of Fabian Quoss. But after 26 hands into the final table Quoss would meet his demise at the hands of superstar Issac Haxton (J♦J♠ > 10♣10♠).

In what was starting to become a recurring theme, Issac Haxton would be the next one out. Haxton saw a rare four way flop of 9♦8♠6♣. After the action was checked to Ike he bet 55,000 into a 100k pot. Two players would fold and Mike McDonald would ship for 455,000. Haxton called with an overpair – J♥J♠, but McDonald flopped a set of sixes. The turn and the river bricked out and Haxton was eliminated in seventh.

Now that the players were on the money bubble, play tightened up considerably. Finally, Tim Adams would shove on the button with K♠Q♥, only to run into Mike McDonald’s A♦K♥. The board came odout low and Adams would own the dubious distinction of being the tournament bubble boy.

High-roller tournament frequenter Scott Seiver would hit the rail in fifth when he ran into the turned full house of Gruissem. Ironically, it was Gruissem that knocked out Seiver in second from the London WPT Alpha8.

Jason Koon and Mike McDonald would be the next duo to tangle when McDonald four-bet jammed with pocket nines. Koon called with A♠K♥. The board ran out J♠J♣5♦8♥2♣ leaving Koon cold decked and out the door.

Chip leader Mike McDonald would be crippled by Gruissem when his pocket sixes ran into the latter player’s Kings. He would be eliminated shortly thereafter as his 2♦2♥ would lose a coin flip to Tom MacDonald’s A♠7♠. McDonald would win over $434k for his third-place effort.

Not many expected the relatively short stacked heads-up encounter between the aggressive Gruissem and Tom MacDonald to last very long. Twenty-six hands into the confrontation Gruissem three-bet all-in holding A♠5♦ only to be called by MacDonald’s slightly superior holding of A♦6♣. Luckily for Gruissem the 5♥ hit on the flop. MacDonald would not improve and the German pro was declared the winner. MacDonald received $679k as a well-deserved consolation prize. It would be Gruissem’s second seven figure cash in a month and his fourth lifetime high-roller title.

The next WPT Alpha8 event won’t take place until February 2014 in Johannesburg, South Africa. Can Gruissem do the unprecedented and make it three straight high roller titles? Time will tell.