WPN’s ‘The Beast’ to Double Down in October 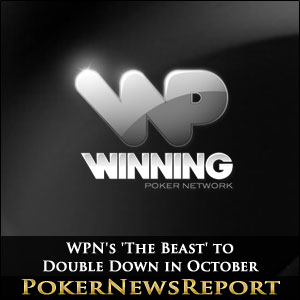 The new payout structure means that winners will see their online accounts credited with bonus money on both the 5th and 20th each month. Those accounts are often from players who have signed up at Winning Poker Network’s flagship skins of Black Chip Poker and Americas Cardroom.

Almost $2 million has been doled out to players since The Beast’s inception and that total will likely grow much higher much more quickly now that a bi-monthly format has been instituted. Americas Cardroom spokesman Michael Harris said in a press release that he and representatives from other poker rooms on WPN are excited to be jacking up the popular promotion that will reward more players, more often.

To commemorate the enhancement of The Beast payouts, Americas Cardroom is offering a reload bonus of 100% up to $200. Players can take advantage of the bonus two days prior to and two days following the commencement of the first bi-monthly leaderboard race on October 1.

The bonus code “EASY200” will be needed by players to sign up for that reload promo. Indications are that a new reload bonus will be offered just prior to each new The Beast competition. This will permit loyal Americas Cardroom players to pad their bankrolls in a consistent and orderly fashion twice monthly.

The new Beast format means that the popular Beast tournament schedule will also be revamped. The 2nd and 4th Sundays of each month will be the dates for those tourneys in which devoted players can win seats by virtue of a top ranking on The Beast leaderboard.

WPN accepts players from the U.S. and has an excellent reputation for timely withdrawal processing. Check out our reviews of both Black Chip Poker and Americas Cardroom to learn more about The Beast and the benefits of playing at the Winning Poker Network. Those benefits include a first-time deposit bonus of 100% up to $1,000. Make sure to use bonus code PNREPORT at both rooms when you create a new account.