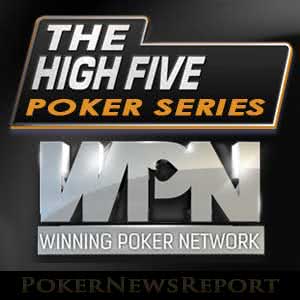 The Winning Poker Network´s “High Five” series may be relatively small when compared with the recently-completed OSS Cub3d series, but it is well worth taking notice of. From next Wednesday (April 18th), the Network will be hosting five feature tournaments for five consecutive days, with buy-ins starting at just $2.20 and the total guaranteed prize money exceeding $1.5 million.

The twenty-five High Five events are in addition to the Network´s regular tournament schedule, which includes the Network´s flagship event, the Million Dollar Sunday tournament. Furthermore, the date of the High Five Main Event (Sunday April 22nd) coincides with a new promotion just announced by the Network in which players have the opportunity to win a package to the Main Event at the WSOP.

More about the High Five Series

The High Five series compresses all the best bits of the Network´s tournament schedule into a value-added, action-packed bundle. For the purists, the series includes deep structured “regular” tournaments in full ring, 8-Max and 6-Max formats. For those who like a little variety, there are mega-stack hyper-turbo events, a 4-Max event and a NL Omaha Hi/Lo Knockout event with a $15,000 prize pool.

The High Five Main Event takes place at 4:00pm (ET) on Sunday 22nd April and has a guaranteed prize pool of $420,000 for the buy-in of $450.00. Although it is bound to be a popular event as it starts during the late registration periods of both the Sunday Special and the Million Dollar Sunday tournaments, the Main Event is being supported by a host of satellites, sub-satellites and Freebuy satellites – including three mega-satellites guaranteeing a combined total of ninety seats in the target event.

From this coming Friday (April 13th), existing players at Black Chip Poker and Americas Cardroom are being offered the opportunity to reload their accounts and receive a 50% bonus up to $200. The minimum deposit to qualify for the bonus is $25.00, and the offer runs from this coming Friday until Tuesday 17th April – the day before the High Five series begins.

In order to take advantage of this opportunity, simply visit the cashier via the poker client and make a deposit using the High Five Reload Bonus Code “Hi5”. The bonus amount will appear in the player admin section of the poker client and is released in increments of $5.00 for each 120 Award Points earned at the tables. Players have thirty days in which to clear the bonus, which most players should manage even if they deposit the maximum $400 to qualify for a $200 bonus.

Do You Want to be Part of the Action?

If you are tempted to take part in the High Five series, benefit from a reload bonus or attempt to qualify for the World Series of Poker, visit Black Chip Poker or Americas Cardroom today. If you do not have an existing account with either site, use the bonus code “[bonuscode room=”blackchippoker”][/bonuscode]” during the registration of your account in order to qualify for a 100% first deposit bonus up to $1,000.

If you need help deciding which of the two sites is better for you, please do not hesitate to read our [geolink href=”https://www.pokernewsreport.com/black-chip-poker”]review of Black Chip Poker[/geolink] and our [geolink href=”https://www.pokernewsreport.com/americas-cardroom”]review of Americas Cardroom[/geolink]. In our opinion, the two sites offer pretty much the same playing experience and the same opportunities – the difference between the two is that Americas Cardroom tends to be more active on social media (which is why the site received a slightly higher score). Good luck at the tables and (if you qualify) in the WSOP Main Event!

Win a Package to the WSOP Main Event

As usual, the Winning Poker Network is hoping to qualify more than fifty players to the WSOP Main Event this summer. And, as usual, the Network is hosting three promotions in order to achieve that aim.