The Winning Poker Network has responded to player requests to play the first day of its $5 million guaranteed on a Sunday by bringing forward the start date.

The Winning Poker Network has responded to player requests to play the first day of its $5 million guaranteed on a Sunday by bringing forward the start date.

Three months ago, the Winning Poker Network announced that its $5 million guaranteed Venom tournament would have two Day 1s, and that players who qualified in advance of the event would automatically be entered for the first Day 1 on Tuesday 16th July rather than the original start date of Sunday 21st July, which was changed to Day 1B.

Naturally some players were unhappy about this because a Tuesday afternoon start time is inconvenient for players who have to work. Furthermore, players who couldn´t take their seats at the start of the event would be blinded out. Consequently, the Network has announced there will now be three Day 1s, with Day 1A rescheduled for Sunday 14th July.

It´s not known yet how this will affect players who have already qualified for the Venom event. Although all three Day 1s currently appear in the WPN tournament lobby, there is a fourth “holding” day shown at present. Players who have already won their seats are advised to contact Customer Support in order to clarify which of the starting flights they will be playing in.

Players who fail to make it through the twelve hours of action on Day 1A (thirty-three levels once breaks are accounted for) have the opportunity to try again on Tuesday 16th July (now Day 1B) or Sunday 21st July (Day 1C). There is little doubt the Network will be running hundreds of value-added satellites during the week in order to get as many players involved in the tournament as possible.

Those that manage to survive the grueling Day 1s, will have to do it all again on Monday 22nd July (Day 2), when play will continue until just eight players remain. If there are more than eight players still in the tournament after twelve hours of play on Day 2, the Network will host a Day 3 on Tuesday 23rd July. The Final Table is scheduled to start at 5:00pm on Wednesday 24th July. 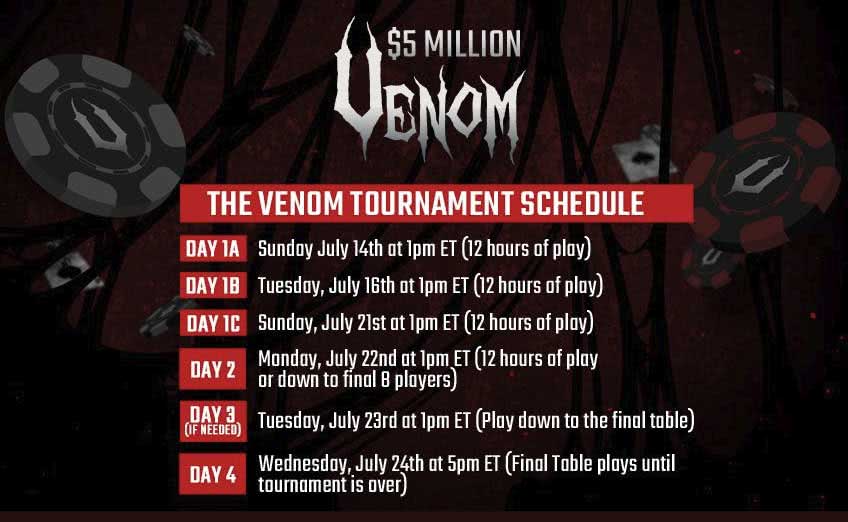 If you are interested in playing in the Venom tournament, there are many different ways you can win a seat. Sites such as Americas Cardroom have a comprehensive satellite schedule and a Steps promotion starting at freeroll level. You can also try your luck in the “Spin to Get IN” slot game in the Venom lobby, or follow @ACR_POKER on Twitter for exclusive promotions.

Indeed, the free-to-enter social media competitions can be very lucrative. Often they consist of a raffle for a Step 5 ticket (worth $215.01) between players that have answered a question correctly or completed a task, but last week the site gave away a $2,650 Venom ticket to the player with the most Twitter interactions in three days.

To be able to take part in these competitions, you need to have two things – a Twitter account and an account with Americas Cardroom (to receive your prize). If you do not yet have an account with the site, details of how you can sign-up and qualify for a 100% bonus on your first deposit (or 200% if you deposit using cryptocurrency) can be found in our review.