Good news for all you poker fans in the USA, highlights from this year’s World Series of Poker Europe (WSOPE) will be aired on ESPN2 this Sunday. 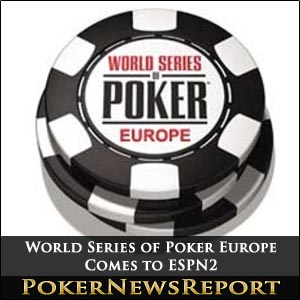 There’s good news for all you poker fans in the USA after the announcement that highlights from this year’s World Series of Poker Europe (WSOPE) will be aired on ESPN2 this coming Sunday.

The poker tournament took place Cannes back in October, with New York’s Elio Fox winning the main event for $1,927,310 and the all-important bracelet at the Hotel Majestic Barrière, and now those eager to see how it all went down can tune in for six action-packed installments.

ESPN2 will broadcast six 60-minute episodes back-to-back on Sunday from 18:00 until 00:00 EST, starting with the Ceasars Cup team tournament.

This event featured players such as Johnny Chan, Ben Lamb, Jason Mercier, Daniel Negreanu and Phil Hellmuth representing Team Americas as they tried gain revenge for losing to Team Europe in the first staging of the event back in 2009.

However, Team Americas faced a side made up of star players Jake Cody, Tony G, Gus Hansen, Maxim Lykov and Bertrand ‘ElkY’ Grospellier, so fans should be prepared for lots of thrills and spills as Team Europe once again emerged victorious following a succession of individual and partner match-ups.

Thereafter, the other five shows will concentrate on the €10,400 buy-in WSOPE main event won by Fox from a final table that featured seven nations and which attracted a 593-player field to create a prize pool of $7,836,414.

Other big-name players to look out for during this extensive coverage of highlights of the poker games from the biggest WSOPE ever include Cody, Shawn Buchanan, Arnaud Mattern, Chris Moorman and Patrik Antonius, while the likeable Norman Chad and Lon McEachern will provide commentary and analysis.

WSOP executive director Ty Stewart was effusive when talking about the upcoming shows, saying: “We continue to be proud of our deep relationship with ESPN to deliver fresh programming to poker fans.

“As the only European tournament broadcast in the United States, WSOP Europe has become one of the most prestigious events in the world in just a few years’ time.”