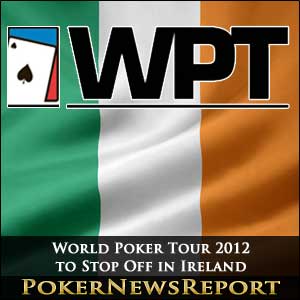 The World Poker Tour (WPT) has announced it will be stopping in Ireland next year during its 10th season, with the WPT Ireland taking place from January 5-8 at Dublin’s legendary City West Hotel.

The €2,500 buy-in main event is to be sponsored by poker room PKR Poker – as part of a three-year deal agreed with the tour – and will also integrate the Irish Poker Championships that were previously held in Galway on the west coast of Ireland.

WPT president Adam Pliska was certainly thrilled to provide more detail on the event, saying that the tour “are excited to be bringing the World Poker Tour to Ireland for the very first time”.

Becoming somewhat misty-eyed, Pliska continued by saying that “the history and heritage of poker in the Emerald Isle make it a tremendous tour stop and the beautiful City West Hotel and all of its top-notch accommodations will make this a memorable event”.

The latest leg of the tour, the WPT Slovenia at the Grand Casino Portorož, was secured by 20-year-old home favourite Miha Travnik, who was playing his first major live event, for $144,399 – as well as a $25,500 entry to the next year’s WPT World Championship at The Bellagio in Las Vegas.

Before the event begins, however, the WPT will stage a press conference at which they will announce various new plans and advances for season 10.

The next European leg takes place between September 5 and 10 with the WPT Grand Prix de Paris at the Aviation Club de France in Paris.