The WPT World Championship is just two weeks away, but pros will already be thinking about the WPT Merit Cyprus Classic which will kick off Season XI. 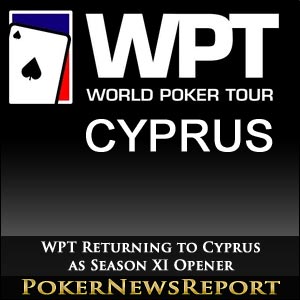 The World Poker Tour (WPT) World Championship is just two weeks away, but pros will already be thinking about the WPT Merit Cyprus Classic which will kick off Season XI only two months after the $25,500 buy-in No-Limit Hold’em main event closes out Season X at The Bellagio in Las Vegas.

While no details of events – other than the $4,000+$400 buy-in main competition – have been released yet, the WPT did provide a few little teasers of what will be happening on the Mediterranean island come the end of July at The Merit-Grand Casino.

Firstly, participants can expect to see member of the Pro Team at Party Poker and renowned poker commentator Mike Sexton, along with the always popular and beautiful Royal Flush girls, on hand to entertain, delight and educate.

July 31 is the Date for Your Diary

The opening festival of Season XI kicks off on Tuesday, July 31, for six days of action over the main event and three side tournaments until August 5 and will be supervised by prominent tournament director Matt Savage. He will, of course, be expected to do his usual stellar job of ensuring that the tour’s much-admired tournament structure runs smoothly.

The main event will be split into two starting days, with a re-entry option available for Day 1b of the $4,000+$400 buy-in No-Limit Hold’em tournament that guarantees a prize pool of no less than $1 million – ensuring that the Season XI begins with a thrilling event on an island that is considered by many to be among the prime holiday destinations in Europe.

Celebrate at the VIP Players’ Party

All you poker players who enjoy a spot of merrymaking (and who doesn’t?) will be pleased to know that a VIP Players’ Party is also scheduled for the evening of Friday, August 3 – with the Royal Flush girls sure to be in attendance – while those eager for cash games can play 24 hours a day with buy-ins at levels to suit even smaller bankrolls. Additionally, the WPT will soon announce details of the numerous side tournaments that will be included on the tour stop.

But, even of you can’t make it to Cyprus to get in on the action, the main event final table on Sunday, August 5, will be streamed online throughout the world on WPT.com, so ensuring that you don’t miss any of the battles.

Of course, while there will be enormous amount of cash up for grabs during the poker festival, players – as well as friends and families – will still be able to enjoy the many fun pastimes that are always available on this paradise island.

Having been a popular summer location for many years, Cyprus possesses an astounding assortment of exciting and relaxing outdoor activities – including snorkelling, jet-skiing and golf.

While there are numerous rooms available to competitors for the duration of a poker festival that is sure to be thrilling, the WPT are offering special deals with some of the more luxurious local hotels – for those who have the cash! Details of these rooms can be found at www.wptregistrations.com.

Meanwhile, poker fans in the USA will be delighted to know that the $100,000 buy-in Super High Roller event at this season’s closing World Championship – which runs from May 19 to 26 in Vegas – will be recorded by Fox Sports Net (FSN) to be broadcast over three episodes on the cable channel’s regional network.