World Poker Tour (WPT) have decided to end their relationship with Seven Casino d’Amnéville – there will be no event staged in Amnéville during season 11. 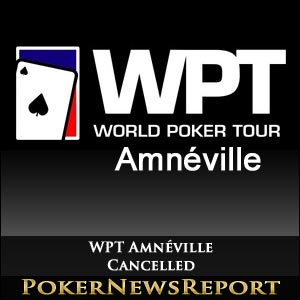 It appears that the World Poker Tour (WPT) have decided to end their relationship with Seven Casino d’Amnéville – meaning there will be no event staged in the north-east French town during season 11 of the tour.

Having staged events in the Lorraine region of the European nation in 2010 and last year, a fall in entries for the main event – as well as a perceived “lack of glamour” – have resulted in the WPT deciding against renewing their contract with the casino, according to local radio station Lorraine France Bleu Nord.

But last year’s flagship tournament could only attract 379 entries as French player Adrien Allain pocketed $471,025. That’s a fall of more than 30% – and has apparently prompted the WPT to drop Amnéville from the tour’s next season, as confirmed by Seven Casino assistant director Christophe Schanne.

While many poker observers will point to the fact that the WPT Grand Prix de Paris could only attract 312 entries – 67 fewer than Amnéville – for last September’s main event, that Aviation Club de France stop possessed a €7,500 buy-in main event, so actually paid out $721,178 to winner Matt Waxman, of the USA.

However, it does appear to be slightly strange that the WPT have apparently cited Amnéville’s location as a problem as it is easily accessible from all over Europe – and was previously considered a major advantage.

If truth be told, it is almost certainly that supposed missing ‘glamour’ – as compared to Paris – that has encouraged the WPT to ditch Amnéville for season 11.

However, Seven Casino’s Schanne pointed out that they will now look to the future by concentrating on staging the fourth stop of season two of the France Poker Series (FPS) – which includes a €1,100 buy-in main event – from May 9 to 13, while also continuing talks with the European Poker Tour (EPT) about the possibility of hosting an event in the near future.