There is a new stop on the World Poker Tour (WPT) season 10 next year after the WPT Lucky Hearts Poker Open was added to take place in mid-February at Hollywood’s Seminole Hard Rock Hotel. 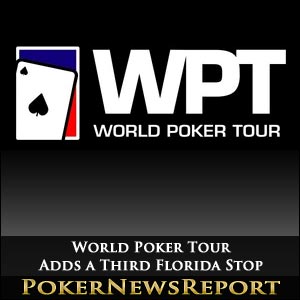 There is a new stop on the World Poker Tour (WPT) season 10 calendar for next year after the WPT Lucky Hearts Poker Open was added to take place in mid-February at Hollywood’s Seminole Hard Rock Hotel.

The Lucky Hearts Poker Open, which will play host to a $3,500 buy-in main event, runs from February 10 to 14 in Florida, although, unlike many of the WPT events, it will not be televised live.

However, the event – which provides a re-entry opportunity on Day 1b – will still be streamed live on the internet with popular blogger, poker pro and commentator Tony ‘Bond18’ Dunst being joined by a so-far-unnamed guest.

Additionally, Poker Hall of Famer and one-time World Series of Poker (WSOP) bracelet winner Mike Sexton will be about – and may even make it into the commentary box – as will the WPT’s wonderful and welcoming Royal Flush Girls.

Incredibly, there will be three WPT tournaments staged in Florida by the end of May next year, with the Lucky Hearts Poker Open arriving two months ahead of the televised Seminole Hard Rock Poker Showdown, which will take place between April 14 and 23 – also in Hollywood – and include a $9,600+$400 buy-in main event.

Just a few days after that main event is concluded, the WPT Jacksonville will play host to a $4,700+$230+$70 buy-in main event from April 28 to May 2 at the Jacksonville Poker Room. This event will also be broadcast on television.

Florida making a big impact on the WPT schedule

Why is this incredible? Well, until the very successful Seminole Hard Rock Poker Showdown was first staged last year, there had been no previous WPT events in Florida.

Poker fans can certainly expect a thrilling return to the Seminole Hard Rock Casino Resort after Taylor Von Kriegenbergh’s first ever WPT victory last year saw the 23-year-old from Massachusetts outlast a field of 433 entrants to lift the title and $1,122,340 top prize.

A total of seven main events will be televised live, so there really is no excuse for poker fans not to enjoy the thrill of the chase come 2012.