The year´s most highly anticipated online poker series starts this Sunday, with 65 events over the next three weeks guaranteeing $30 million in prize money. 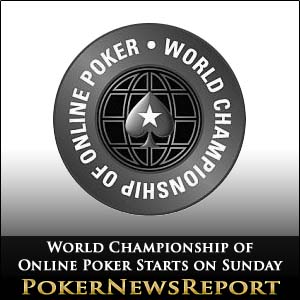 The year´s most highly anticipated online poker series starts this Sunday, with 65 events over the next three weeks guaranteeing $30 million in prize money.

Throughout the next 21 days, players will be put to the test in disciplines including Omaha, Razz, Badugi, Stud and Draw, with mixed poker tournaments, bounty tournaments and shoot-outs to add even more variety to the championship series – which culminates with a $5,200 buy-in NL Hold´em Main Event on 23rd September that offers a $5 million guaranteed prize fund with at least $1 million being paid to the winner!

In addition to picking up substantial cash rewards, winners of each event will receive a WCOOP bracelet, while any player who cashes in an event will receive points for the WCOOP Player of the Year Tournament Leader Board. The Player of the Year receives a champion´s trophy, a package to the 2013 PokerStars Caribbean Adventure, a package to the 2013 EPT Grand Final Main Event, entry into the Turbo Championship of Online Poker Main Event and a custom PokerStars WCOOP chip set and the next four runners up are also rewarded for their efforts.

PokerStars are also offering existing players a 20% reload bonus on deposits made before midnight on Tuesday 4th September  up to a maximum of $/£/€/CAD 100 (i.e. deposit $500.00 and receive a $100.00 bonus). Players have 45 days in which to earn the FPP Points to clear the full amount of the bonus into their accounts and it will be released in $5.00 increments, so if you do not quite meet the clearing requirements you will not lose out. Use PokerStars Bonus Code WCOOP to get the 20% reload bonus.

PokerStars Radio will also be on the air each day from 7.00pm (GMT) with presenters Joe Stapleton, Nick Wealthall and Matt Broughton commentating on the day´s events plus during each show a special PokerStars Radio turbo tournament will be played (buy-in $1.00), the winner of which will be contacted by phone before the end of the broadcast and asked a WCOOP related question. If they get it right, in addition to their tournament winnings, the player will receive a $215.00 buy-in ticket for a WCOOP event. Full details of the PokerStars Radio Daily Tournie and audio coverage of the WCOOP events can be found on the PokerStars Radio WCOOP web site.