The World Amateur Team Championship 2011 takes place on August 25th and 26th as part of the World Championship of Amateur Poker festival at Nottingham’s Dusk Till Dawn. 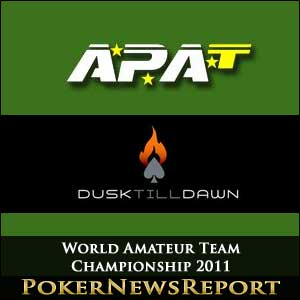 The World Amateur Team Championship 2011 takes place on August 25th and 26th as part of the World Championship of Amateur Poker festival at Nottingham’s Dusk Till Dawn.

Four-player teams from fourteen different countries will battle out the Championship in a series of events over the two days for crowing rights, a significant amount of cash (about £3,000) team gold medals and an engraved World Team Championship Cup.

Current “crowers” are Wales, who won last year´s event ahead of Canada and Northern Ireland with a team comprising of Paul McGuinness, Dylan Herbert, Dan Owston and Richard Rudling-Smith, and team captain Paul McGuiness has kept the quartet intact for a chance to become the first team to retain a World Amateur Team Championship.

The competition promises to be fierce with teams from Canada, England, France, Germany, Holland, Italy, Northern Ireland, Poland, Portugal, Republic of Ireland, Scotland, Spain and a team comprised of female poker players from the USA, all wanting to take the title from the Welsh team.

To determine the World Team Champions, points are awarded in the following disciplines depending an individual´s performance, and added together to create the team score:

The Team Championship is a nice warm-up event ahead of the World Championship of Amateur Poker, for which the Main Event kicks off on Saturday 27th August and runs throughout the bank holiday weekend.