Chris Moorman narrowly missed out on his first major live poker triumph, coming second to Wojtek Barzantny in the UKIPT Online ME after a four hour heads-up. 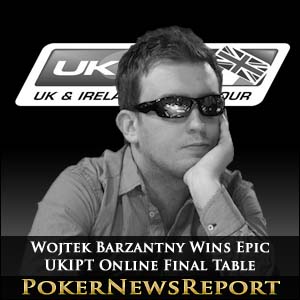 Chris Moorman narrowly missed out on his first major live poker triumph, coming second to Wojtek Barzantny in the UKIPT Online ME after a four hour heads-up.

Wojtek Barzantny overcame the most prolific online tournament player in the UK to claim the live finale of the UKIPT Online Main Event yesterday at the Gala Casino in Bristol. The 24 year-old student from Kaiserslautern in Germany collected the championship trophy and winner´s cheque for £77,126 after emerging victorious from a four-hour heads up battle against Chris Moorman.

Barzantny had started the day second in chips among the seven remaining players – reduced from the original eight because Sregey ‘Seradja’ Sergeevich Prostakov was unable to get a visa in order to fly in from Russia – and wasted no time getting involved in the action. Within a few hands he had eliminated Ben Jenkins in seventh to nick a slight chip lead when his A♠ Q♦ rivered the A♣ to best Jenkins´ 8♠ 8♣.

However, the chip leader at the start of the day – Rafael Porzecanski – claimed back the lead almost immediately, betting Barzantny out of a 400,000 chip pot after the flop. Third placed Chris Moorman did not enjoy the start he had hoped for – doubling up David Lenz in a A♣ K♣ > 9♥ 9♠ race – but soon got his chips back when flopping a straight to cripple Dan Smyth (K♥ J♠ > K♣ Q♦ on a flop of Q♣ 10♠ 9♥).

The three “overnight” chip leaders were the last three men standing after a trio of quick eliminations. Dan Smyth was the first to depart – his last two big blinds failing to hit anything against Wojtek Barzantny’s A♠ 9♠ – and he was quickly followed to the rail by Joep Van den Bijgaart who ran his K♠ J♠ into the A♠ K♦ of Chris Moorman.

Wojtek Barzantny was also responsible for the elimination of countryman David Lenz, after Lenz (A♦ Q♦) had six-bet all-in pre-flop against Barzantny´s A♥ A♣ and, going into three-handed play, not only were the three remaining players those who had held the lead at the start of play, they also remained in the same order.

Two big hands saw Chris Moorman eliminate Rafael Porzecanski and take the chip lead. In the first he called the Uruguayan´s post-flop shove with K♠ Q♠ against Porzecanski´s K♦ 5♦ on a board of 4♦ J♦ Q♣ and managed to avoid the diamond in order to double up.

Porzecanski was also the aggressor in the second hand – shoving his last 600,000 chips with A♣ 4♣ just a few hands later and running into Chris Moorman´s Q♠ Q♥. With no Ace to help him among the community cards, Porzecanski was out in third.

Barzantny and Moorman in Epic Heads-Up

The heads-up between Wojtek Barzantny and Chris Moorman lasted longer than the rest of the day. During four hours, the chip lead would change five times with rarely more than a few big blinds separating the two players. Frequently Barzantny would chip away into a small lead, only for Moorman to level up, and it was incredibly the first all-in and call hand of the heads-up which decided the outcome of the GUKPT Online Main Event.

In addition to collecting £77,126 for his first place victory, Wojtek Barzantny also won a seat in the UKIPT Champion of Champions event which will be played in March 2013 after the final leg of the UKIPT Season 3 has been played in London.

Before that, there is the small matter of the UKIPT Bristol Main Event to sort out. The £770.00 buy-in event starts today and you can keep up to date with all the news by following PokerNewsReport.com on Twitter.