Wojtek Barzantny Does the UKIPT Double

Wojtek Barzantny took down the UKIPT Bristol, after a colossal heads-up battle with James Greenwood, for his second Main Event victory in five days. 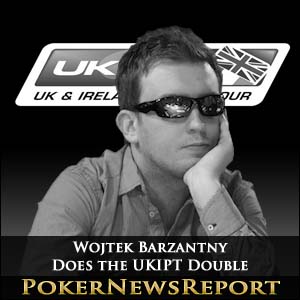 Wojtek Barzantny took down the UKIPT Bristol, after a colossal heads-up battle with James Greenwood, for his second Main Event victory in five days.

There was a definite sense of déjà vu at the Gala Harbourside Casino in Bristol yesterday as, for the second time in less than a week, we were watching young German student Wojtek Barzantny in a titanic back-and-forth heads-up struggle for a UKIPT title. Last week it was Chris Moorman who narrowly missed out on his first major live poker triumph – this time it was to be London cash game professional James Greenwood.

With blinds of 8,000/16,000 (ante 2,000), nobody was under pressure to get their chips in the middle at the beginning of play. Clearly Niall Murray had not read the script, as he shoved first hand with pocket Tens and twice more during the first level without getting called. There was an early clash between the chip leaders, when Robert Bull´s A♣ K♠ got the better of Wojtek Barzantny´s A♥ Q♠ on a ten-high board, and Amanda Sidark chipped up at the expense of Barzantny and Craig Goddard.

Indeed it was Sidark who was responsible for the first elimination of the day – taking out Jonathon Prince when her A♠ K♥ held against Prince´s K♦ J♣. Niall Murray (A♥ Q♠), who had now shoved five times, was the next to depart – getting called by Barzantny´s pocket Tens and seeing a flop of 10♦ 2♦ 2♣ – but, despite Barzantny´s now massive chip lead, he was soon to be in trouble.

The harder Wojtek Barzantny tried to capitalise on his chip advantage, the worse it got for him. The German was unlucky to see Craig Goddard double up when Goddard´s pocket Threes hit a set on the flop to beat Barzantny´s pocket Kings but, when James Greenwood doubled up against him (A♦ J♦ > K♣ Q♣) and then forced him out of a million chip pot with a river shove, the cracks were beginning to show.

James Greenwood then took the chip lead when his A♣ A♠ held against Craig Goddard´s A♥ Q♥ (Goddard out in sixth) and Barzantny fell below one million chips – and into fourth place of the five remaining players – when failing to pair his A♠ or J♦ against Anthony Forsyth-Forrest´s pre-flop shove with pocket Fives.

Sidark, Forrest and Bull hit the Rail as Barzantny Recovers

Three quick eliminations turned the tournament back in favour of Wotjek Barzantny. First, Amanda Sidark ran her K♣ Q♥ into Robert Bull´s pocket Nines and, although the Q♦ was the first card dealt on the flop, hopes of the first female winner of a UKIPT Main Event quickly evaporated as Bull hit a set of Nines when the 9♥ appeared as the second card on the flop.

Anthony Forsyth-Forrest was the next to depart. After being crippled by James Greenwood when Greenwood rivered a nut flush, Forrest got the last of his chips in with pocket Nines against Barzantny´s A♠ 9♠ and was eliminated when the A♥ was dealt on the turn. Wojtek Barzantny completed his recovery by eliminating Robert Bull in third – flopping a King in a A♥ K♥ v 10♣ 10♥ race – to regain the chip lead and take a narrow advantage into the heads-up against James Greenwood.

Heads-up play lasted for over three hours, during which time both players took significant chip advantages and their opponent battled back. After two hours Barzantny hit trip Aces to take a 4:1 chip lead and thought it was all over in the next hand when his K♦ J♦ met with the board of 7♦ 5♦ 3♥ against Greenwood´s A♣ 9♦. However, not only did James Greenwood manage to avoid the flush, he also hit 9♠ on the river to give him a much needed double up.

Greenwood then doubled up again to take the chip lead – his K♠ 5♣ hitting two pairs to master Barzantny´s A♠ J♥ – but then it was Barzantny´s turn to double back, flopping two pairs with 9♣ 2♠ to regain the advantage. Fifteen minutes later, it was all over.

The turn card (5♦) and river (9♣) failed to help Greenwood, and Barzantny had achieved the remarkable feat of winning two UKIPT Main Events in the space of five days.

By winning the Bristol UKIPT Main Event, Wojtek Barzantny joins Joeri Zandvliet and Nick Abou Risk as the only dual winners of UKIPT Main Events, but whether he will be allowed to occupy two seats in the UKIPT Champion of Champions event next March remains to be seen!