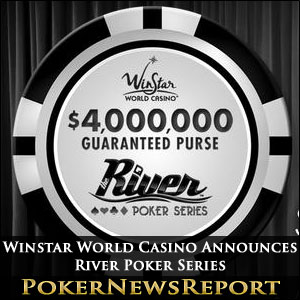 Winstar World Casino, which bills itself as the World’s Second Largest Casino, brings back the popular River Series Poker Tournament, starting August 14 and running through September 2. This year’s schedule includes ten events. Buy in amounts range from $340 to $5000 for the NLH “No Juice” Event on August 28.

The River Poker Series has grown in popularity as has the prize pool guaranteed. Last year the Series drew a multitude of pro’s, grinders, and hopefuls from Oklahoma, Texas, Louisiana and the Southeast, along with decent showing from the rest of the country. T.J Cloutier, David “Doc” Sands, WSOP Main Event Champs Chris Moneymaker, Grey Raymer, Scotty Ngyen, David Baker, Maria Ho, November Niner Rob Salaburu, Paul Wasicka and Vanessa Selbst were among the 1394 runners in the $2500 NLH Main Event. Last year’s winner pocketed over $651K.

This year’s schedule expands on the Reentry Tournament format which has gained in popularity over the past couple of years. Five of the events, including the main event, are reentry tournaments.

Winstar World Casino features over 500,000 square feet of gaming area and is owned and operated by the Chickasaw Nation.