The US-facing online poker network – Winning Poker – has announced a comprehensive Online Super Series to be played among skins on the network from January 13th. 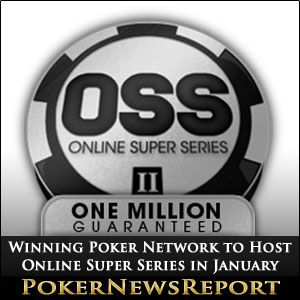 The rapidly growing network – which includes US friendly online poker rooms such as Americas CardRoom, True Poker and the recently-migrated Black Chip Poker – has guaranteed $1 million in prize money for the 82 event series which will feature three major tournaments on January 13th ($100,000), January 20th ($150,000) and January 27th ($200,000).

Unlike the recently concluded Full Tilt Online Poker Series, players will not have to have substantial bankrolls to compete in the Online Super Series events, with some buy-ins starting as low as $3.30, and a number of low-entry “super-satellites” scheduled prior to the feature tournaments in the series – some offering hundreds of guaranteed seats to the target events.

The majority of the tournaments will be played in NL Hold´em and Pot Limit Omaha, and most will have a re-entry/late registration period (not re-buy – unless stated) of two hours. This could significantly benefit European poker players who want to get involved in the more valuable tournaments that do not start until 10.00pm ET (4.00am CET) as, by the time the US poker players are ready to curl up under their duvets; players in London, Paris and Munich will be just about ready for their cornflakes!

For online poker players in Europe who do not want to disturb their beauty sleep to take advantage of the many potential overlays, the weekend tournaments in the Online Super Series II start at 2.00pm ET (8.00pm CET) on Saturdays and 3.00pm ET (9.00pm CET) on Sundays, and a good battle could ensue from players on either side of the “Pond” to see who will capture the Online Super Series Leaderboard competition which is running alongside the series and the sterling silver bracelet which will be awarded to the winner.

The tournament series will run for 15 nights from January 13th to January 27th and, in order to attract new players from both the US and the rest of the world, many skins on the Winning Poker Network are currently offering a first deposit 100% match bonus up to $1,000 without a time limit on how long players have in which to redeem their bonus. Check out our Black Chip Poker review here for more information.