The Winning Poker Network (WPN) has announced that players may use Bitcoin as a method of deposit, bringing more credibility to the virtual currency. 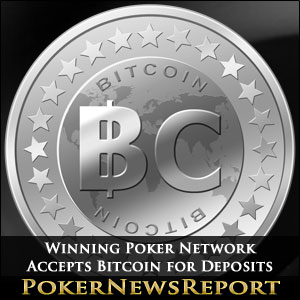 The Winning Poker Network (WPN) has announced that players may use Bitcoin as a method of deposit, bringing more credibility to the virtual currency.

Much of that attraction comes from speed and efficiency in processing withdrawal requests of players. Adding Bitcoin as a deposit option may attract even more players as the digital currency seems to be slowly gaining acceptance in the online poker industry.

Bitcoin deposits at WPN will be converted to U.S. dollars and players wishing to cashout who used that deposit method must also withdraw in USD. That may change in the future, however, as a Bitcoin withdrawal functionality is reportedly in the works.

A WPN Bitcoin deposit will receive USD at the current exchange rate. Players will not be exposing themselves to the risk involved in Bitcoin’s fluctuating value. This differs from SealsWithClubs, as player account balances at that site rise and fall according to the latest Bitcoin rate of exchange.

The decision by WPN to add Bitcoin deposits may be the start of a trend among poker rooms and networks. It is seen by some as quite significant due to WPN’s ranking in the worldwide market, which finds the network 23rd in cash game traffic.

Bitcoin is not currently regulated and is traded nearly anonymously. Those factors make it somewhat appealing as an online poker payment processing option. However, that appeal is also in demand by the criminal element who value Bitcoin as a means by which ill-gotten money can be laundered.