Winners and Losers in Full Tilt Poker Acquisition by PokerStars

The news that PokerStars are to acquire the assets of Full Tilt Poker and repay players should be a win/win situation, but not everybody is going to benefit. 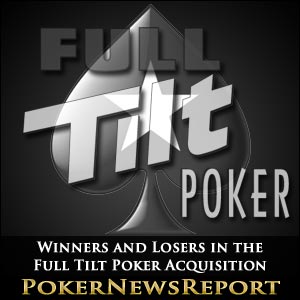 The news that PokerStars are to acquire the assets of Full Tilt Poker and repay players should be a win/win situation, but not everybody is going to benefit.

After the dust had settled on the statements made by the US Department of Justice, PokerStars and the former owners of Full Tilt Poker yesterday, there were nearly as many questions being asked as had been answered. Obviously, players were delighted to be recovering funds many thought they would never see again but, as they discovered the details of the deal it became clear that there were going to be both winners and losers in the acquisition of Full Tilt Poker by PokerStars.

And the Winners Are …

PokerStars are obviously the biggest winners in this deal. Having been the number 1 online poker room for 6 years since UIGEA, now acquiring the assets of their biggest ever competitor (preventing anybody else from having them) and controlling the market going forward, $731 million is a comparatively small price to pay. PokerStars are now in control of Zoom Poker, Rush Poker, WCOOP, SCOOP and FTOPS.

Players who have access to Full Tilt Poker when it is re-launched (and not everybody will – see below) are going to have the facility to transfer funds between their Full Tilt Poker and PokerStars accounts. This effectively is going to double the number of cash game tables, Sit n Go and MTTs available to players without them having to double the size of their bankrolls.

The taxman is also going to benefit from $334 million being returned to players – not just those in the States who will have to apply through the US Department of Justice for their money – but those in the “Rest of the World” (RoW) who may now reside in countries which have recently become regulated and whose income from poker now gets reported to that country´s licensing authorities.

Bwin.party, who were the leading online poker site prior to UIGEA before withdrawing voluntarily (and forfeiting their market position to PokerStars) , who paid a penalty of $105 million to the US Government in return for a non-prosecution agreement and who (according to Reuters) were also in negotiations to acquire the assets of Full Tilt Poker. Shares of Bwin.party fell 7% on the London Stock Exchange yesterday and continued to plummet in trading this morning.

Those who purchased Full Tilt Poker balances from other players at a percentage of their value might experience difficulty getting paid. A statement by Full Tilt Poker´s customer service explained “… … additional security measures will be put in place to authenticate and validate all accounts. Access to current and previous Full Tilt Poker accounts will only be provided to the owner of the account. This has been so as of June 29th, 2011. We would also like to point out that we will not be responsible for any account transfers, account ownership changes, nor for changes to any account details since the above-mentioned date.”

The new Full Tilt Poker software will not be available to everybody else in the Rest of the World. PokerStars have already announced that there will be no Full Tilt Poker in France, Italy, Spain, Denmark, Belgium and Estonia and players in countries ring-fenced player pools apply and there is no access to Zoom Poker will also be denied the opportunity to play on Rush Poker.

Players in the afore-mentioned countries will therefore be unable to access their Full Tilt Poker accounts and withdraw funds from them.  Discussions are taking place already to see if it will be possible to transfer FTP balances into existing PokerStars accounts – assuming former Full Tilt Poker players have one – but these transfers are likely to attract the attention of the taxman (see above) who will benefit accordingly.

While the Full Tilt Poker media frenzy was spiraling out of control yesterday afternoon, it was also announced that the US Attorney´s Office had filed a motion for the group assets of Absolute Poker and Ultimate Bet to be forfeited and liquidated by the US Government. This motion was signed off and players in the US who had balances in either of these two poker rooms can apply to the US Department of Justice for a refund – although it is likely that only a fraction of what is due to them will be recoverable due to the owners of Absolute Poker and Ultimate Bet running the two poker rooms into the ground after Black Friday.