It is definitely time to top up your PokerStars account if you like free poker money, as the site is giving away $100,000´s in its new Mega Bonus promotion. 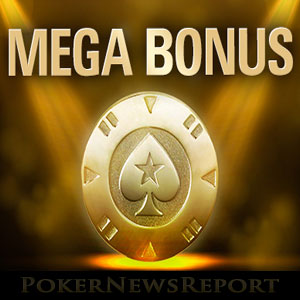 It is definitely time to top up your PokerStars account if you like free poker money, as the site is giving away $100,000´s in its new Mega Bonus promotion.

Players can make one deposit every week and win a prize every time; so, although the chances of hitting the jackpot prize are ten in a million, those odds can be substantially reduced by participating in the promotion from today up until Sunday 23rd August.

The promotion is very simple. All players have to do is make a deposit within the qualifying periods (below) using the PokerStars bonus code “MEGABONUS”. Within minutes players will receive a pop-up in the poker client advising them of the prize they have been awarded.

Players who win a ticket into an all-in shootout have to manually register for the events being played at 13:47pm (ET) on Mondays 3rd, 10th, 17th and 24th August, but there is no need to be present when the game is being played, as every player is all-in every hand until the prize money is determined.

The prize money won in the all-in shootouts and the cash prizes awarded in the Mega Bonus promotion can be used immediately for any PokerStars product (I.e. there is no clearing requirement), but players should be aware that if they request a cash out during the promotional period, that week´s prize and any subsequent prizes will be voided.

Deposit Within These Qualifying Periods to Win a Prize

The four qualifying periods each run from Monday to Sunday as follows:

Players who do not yet have an account with PokerStars can also take advantage of the promotion, and in addition get an extra $10.00 free poker money. To take advantage of this offer, simply register an account with the site and make your first deposit using the PokerStars bonus code “MEGAFIRST”. You will know within minutes what Mega Bonus prize you have won, and the free $10.00 will be credited to your account within 36 hours once PokerStars have checked that you are a genuine first time depositor.

Please note that when you use the PokerStars bonus code “MEGAFIRST”, your deposit will not be eligible for PokerStars first deposit bonus[isGeoAllowed] as featured in our [geolink href=”https://www.pokernewsreport.com/pokerstars”]PokerStars review[/geolink][/isGeoAllowed]. Don´t worry about that. Once the promotion has concluded, you will still have three months from the date you registered your account to make a deposit that qualifies for the first deposit bonus of 100% up to $600.00.