Win up to $1 Million in PokerStars Spin & Goal Game

PokerStars has launched a new World Cup-themed variant of its Spin & Go game in which players can win up to $1 million plus free sports bets. In order to support the new game, PokerStars is giving away ten $5.00 Spin & Goal entry tickets in hourly freeroll tournaments running every day until July 23rd. 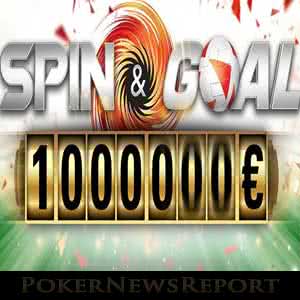 PokerStars has launched a new World Cup-themed variant of its Spin & Go game in which players can win up to $1 million plus free sports bets. In order to support the new game, PokerStars is giving away ten $5.00 Spin & Goal entry tickets in hourly freeroll tournaments running every day until July 23rd.

For the benefit of new players unfamiliar with the format of Spin & Go games, they are three-handed hyper-turbo games of NL Hold´em in which players start with just 500 chips and in which blinds increase every two minutes. Before the start of each game, a random prize is selected between 2x and 12,000x the buy-in.

To celebrate the forthcoming World Cup in Russia, PokerStars is running a special edition of the popular game with a $5.00 buy-in and a top prize of $1,200,000 – $1 million of which will go to the winner of the game, while the second and third placed players each receive $100,000. In addition, players winning games with smaller prize multipliers can also win free sports bets.

How to Play Spin & Goal for Free

To support the launch of Spin & Goal, PokerStars is giving players the opportunity to win free Spin & Goal entry tickets in hourly freeroll tournaments. Players who have registered a new account since June 1st will find five freeroll tickets already waiting in their accounts. Existing players have to enter the Star Code “SPINGOAL” in the “Tools” section of the poker client in order to receive two freeroll tickets.

Each freeroll tournament rewards the top ten players with a $5.00 Spin & Goal entry ticket to use at any time up until July 23rd. In our experience, we have found it more productive to play freeroll tournaments with a limited number of prizes during the quietest times on the site to increase your chances of winning. If you leave it until a Sunday evening to play, you could be in a field of thousands. 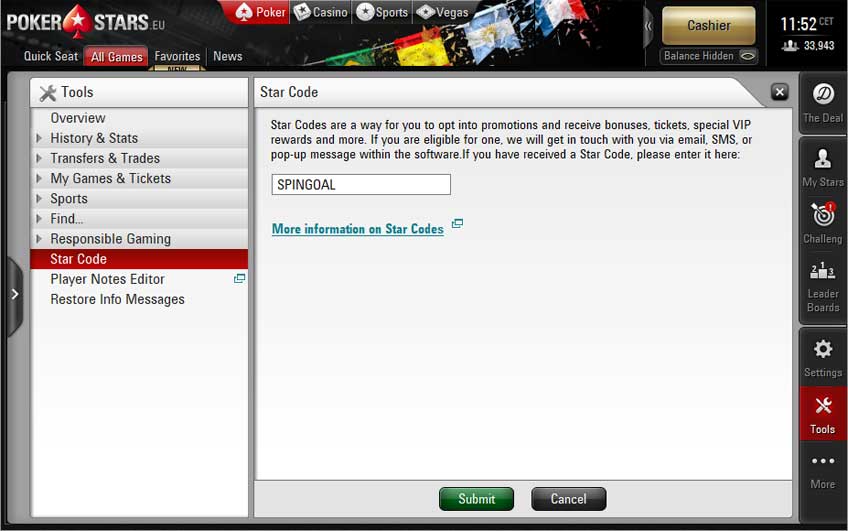 Each special edition Spin & Goal game has the usual range of multipliers from 2x to 240x plus the $1.2 million top prize. When the random prize selected is 2x the buy-in, the winner of the game is guaranteed to win a free sports bet with a value of between $1.00 and $10.00. In games with higher prize multipliers, there is only a one-in-five chance of a free bet also being awarded.

The free bets can be used on any event being covered by BetStars, but please note only the winning element of your bet will be credited to your account. For example, if you bet $2.00 on a 5/4 chance, only the winnings of $2.50 will be credited to your account. The stake is not returned. Please also note free bets expire after seven days if not used.

If you are playing on PokerStars´ shared EU liquidity platform, there are a few differences to be aware of. The first is that the buy-in for the Spin & Goal games is €7.00 (rather than $5.00); but, if you hit the top prize you get paid out in Euros instead of dollars. At the time of writing, €1 million Euros is worth $1,168,695, so we know which site we would rather play on.

The second difference is that, rather than hourly freeroll tournaments, the freerolls awarding free Spin & Goal tickets run three times daily at 12:30, 20:30 and 22:30 (all times CEST). However, instead of giving away ten Spin & Goal entry tickets, these events reward the top twenty players with a free ticket. There are also slight differences in the odds of winning a free sports bet in Spin & Goal games.

Depending on which PokerStars platform you play on, there are several special offers for new players. For example, new players on the .uk platform are being offered four free $5.00 Spin & Goal tickets plus $10 dollars cash for making a deposit of £10.00 or more and using the PokerStars bonus code “GOAL20”. New players in France, Spain and Portugal are being offered one free €7.00 Spin & Goal ticket plus €13.00 in cash for deposits of €10.00 or more.

In order to take advantage of any of these special offers, new players should create their PokerStars account using the [geolink href=”https://www.pokernewsreport.com/pokerstars”]PokerStars marketing code “[bonuscode room=”pokerstars”][/bonuscode]”[/geolink] during the registration process (this field appears on the second page as shown below). Please note, if you intend creating a new PokerStars account on the shared EU liquidity platform, you will have to verify your ID and address before being allowed access to any real money poker games. 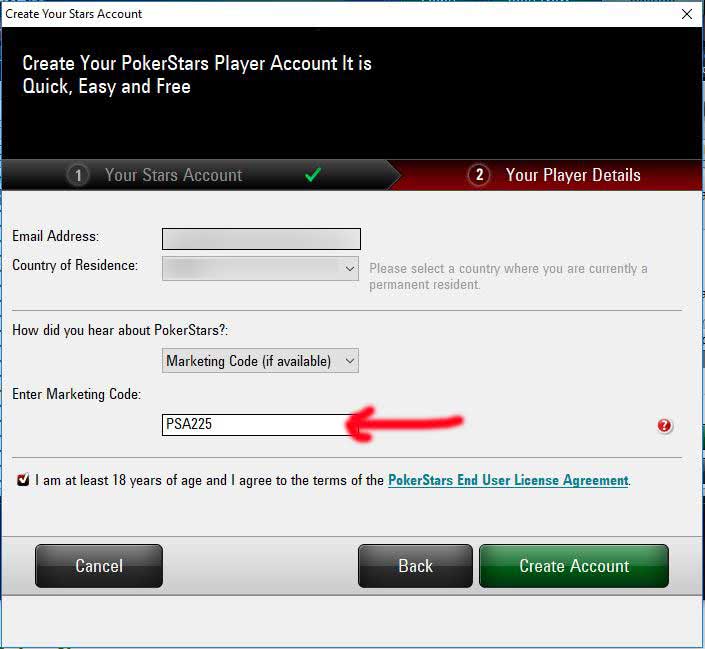