PokerStars is offering players the opportunity to win seats in next weekend´s $1 guaranteed Red Spade Open tournament by tweeting their best poker tips. 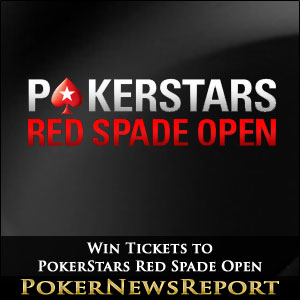 PokerStars is offering players the opportunity to win seats in next weekend´s $1 guaranteed Red Spade Open tournament by tweeting their best poker tips.

The Red Spade Open is one of the most popular stand-alone tournaments on PokerStars because it is the event in which nearly all of the PokerStars Team Pros compete. As well as a chance to play against the top names in online poker – and have a chat with them at the tables – there is also the small matter of a $1 million guaranteed prize pool, which assures the winner of the tournament a cool $100,000.

In addition, each of the PokerStars Team Pros has a $250 bounty on their heads and, if you bust Team Pro Ike Haxton, you will also be invited to a heads-up game against him for $1,000. The Red Spade Open is scheduled for Sunday 26th October @ 15:00 (ET) and players can either buy-in directly ($55.00), qualify through PokerStars extensive satellite structure or win a ticket via PokerStars´ Twitter competition.

PokerStars are offering players the opportunity to win a seat in the Red Spade Open for simply revealing their best poker tip. The best three tips chosen by a panel of Team pro judges (Chris Moneymaker, Jonathan Duhamel and Vicky Coren-Mitchell) will each be awarded a seat in the tournament and have their tips published on the PokerStars web site.

To take part in the competition you must have a) a Twitter account and b) a PokerStars account. Then all you have to do is compose your tip and tweet it with the hashtag #RedSpadeOpen3Tips and your PokerStars player screen name. If you need some inspiration, here are some of the best tips that we have spotted so far:

@PokerStars Someone will always be luckier, more intelligent, younger, but never like you, trust yourself #RedSpadeOpen3Tips [25krid9]

@PokerStars Find like-minded people to discuss poker and strategy with, it will help your game no end! #RedSpadeOpen3Tips [Fadyen]

@PokerStars Beginners usually fold to a huge bet with only a pair on the river, most bluffs get through here. #RedSpadeOpen3Tips [justaweek]

The “Tweet your best poker tip” promotion is open to players who have accounts on pokerstars.com, pokerstars.be, pokerstars.ee, poekrstrs.dk, or pokerstars.eu. The deadline for receiving the tips is midnight (ET) tomorrow Wednesday 22nd October, and poker Stars will announce the winners (and award the seats) on Friday 24th October – Good Luck!

The Red Spade Open tournament is the highlight of a week when many of the PokerStars team Pros will be interacting with players more than usually at the tables and in a series of unique Q&As on the @PokerStars Twitter Account.

Each day throughout Team Pro Week, PokerStars-sponsored pros will be hosting a $0.02/$0.04 Zoom Poker for a one-hour session. Players who survive the session in profit will have their winnings multiplied by seven. The times for these challenges varies so that players from all over the world will get the opportunity to play against a Team Pro and, if you follow @PSTeamOnline on Twitter, you can find out who is playing and when.

There is also the opportunity for players to win packages to the PCA by winning one of two special “Team Pro Online Bounty Tournaments” (Saturday 25th and Sunday 26th @ 14:00 ET), both of which has a $20,000 prize pool. Entry to the two tournaments is free to players who make a deposit using the PokerStars bonus code “ONLINE2014” and the winners of the two tournaments will play off against a Team Pro on Monday for the PCA package prize.

Full details of the Red Spade Open, the terms and conditions of the “Tweet your best poker tip” promotion and more information about Team Pro Week (including how to join PokerStars team pro) can be found on the dedicated PokerStars web page.