Starting today (May 6), 888Poker will be running special WSOP League tournaments for players in selected countries, with seven trips to Vegas up for grabs. 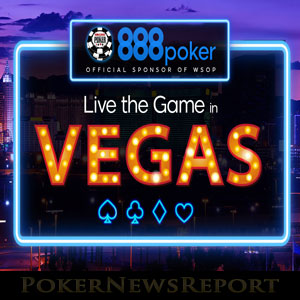 Starting today (May 6), 888Poker will be running special WSOP League tournaments for players in selected countries, with seven trips to Vegas up for grabs.

In you play on 888Poker, and you live in Australia, Brazil Canada, Germany, Poland, Sweden or the UK, there is an additional reason for you to get your best tournament game together over the next couple of weeks – the opportunity to represent your country in the WSOP “Crazy Eights” event for free.

Starting today and running until Friday May 20, 888Poker will be hosting special WSOP League tournaments with buy-ins starting at just $0.01. At the end of the promotion, the twenty-seven best-performing players from each country will be awarded a seat in their country´s Grand Final Championship on Monday May 23.

The winner of each country´s Grand Final Championship will win a $3,000 package to the World Series of Poker in Las Vegas to compete in the 888Poker-sponsored “Crazy Eights” event from Friday July 1 to Monday July 4 (Independence Day) – anticipated to be one the most popular events of the series.

More about the Crazy Eights Event

The “Crazy Eights” event is so-named for several reasons. Obviously 888Poker´s sponsorship has a big influence on the naming of the eight-handed event, but so does the buy-in of $888 and the guaranteed first prize of $888,888.

It is anticipated that every player making it into Sunday´s Day 2 will be in the money. The plan on Day 2 is to play ten 60-minute levels, with the surviving players returning on Monday to play down to a winner. Depending on the volume of players entering the tournament, the “Crazy Eights” event could run into a fourth day.

Other Routes to Vegas for the WSOP

If you are not eligible to play in this promotion because of your location, or you fail to qualify for your nation´s Grand Final Championship, 888Poker is offering a number of routes to book your seat in a WSOP event. Undoubtedly, one of the most popular routes is 888Poker´s Steps tournaments.

The Step tournaments have six buy-in levels starting at just $0.01. The player(s) who wins each tournament is rewarded with a seat in a higher step event. Continue up the steps until you reach Level 6, and you could win a $12,500 package to the WSOP Main Event from July 10 to July 15.

Players who win a Level 5 tournament also have the option of exchanging their Level 6 ticket for a WSOP “Crazy Eights” qualifier that also has a $3,000 package up for grabs. As the WSOP approaches, the Steps events are going to become more and more popular as they represent an excellent way to qualify for the world´s premier live poker event.

If you are not yet playing at 888Poker, you are invited to take advantage of our exclusive 888Poker bonus that matches your first deposit up to $600 instead of the site´s own offer of a 100% match bonus up to $400. There are no special 888Poker bonus codes to use in order to take advantage of this offer, simply click on the link below to be taken directly to the relevant 888Poker site for your country.

Further information about this exclusive bonus and details of how to clear it can be found on our [geolink href=”https://www.pokernewsreport.com/888-poker-bonus”]888Poker bonus page[/geolink]. Alternatively, head straight over to the site today in order to start your qualifying route to the World Series of Poker. Hurry! The 2016 WSOP series starts on Wednesday June 1!