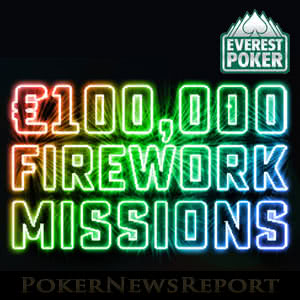 [geolink href=”https://www.pokernewsreport.com/everest-poker”]Everest Poker[/geolink] is hosting a new missions-based promotion in which players have to complete daily, weekly and monthly missions to be in with a chance of winning a share of €100,000. Called “Firework Missions”, the promotion is similar to many that have been hosted by the site throughout the year, with the exception that players have a choice of which daily and weekly freerolls they wish to compete in.

This improvement to the promotion will enable more players to win a share of the €100,000 prize pool; plus, as the promotion runs over five weeks rather than the usual four weeks, more players will have the opportunity to qualify for the monthly freeroll final that has a prize pool of €25,000. Furthermore, Everest Poker is one of just a handful of iPoker skins running this promotion this month.

How to Participate in the Daily Firework Missions

To participate in the daily Firework Missions, you first have to opt into the promotion via the “My Missions” section of the Everest Poker client. You will then be asked to choose between a cash mission and a Twister mission that vary according to the day of the week. Cash game missions can be completed on any NL Texas Hold´em cash game table (heads-up excluded) with a minimum stake of €0.05/€0.10.

Once you have completed each mission (you are limited to one mission per day), you will be awarded an entry ticket to a €500 Firework Missions freeroll tournament. You have the choice of whether to enter a “playable” freeroll at 8:00pm (all times GMT) or an All-In Shootout freeroll at 9:00pm – the latter event being ideal for players who will not be physically present when the freeroll tournament gets underway.

Qualifying for the Weekly and Monthly Freeroll Tournaments

Players can qualify for one or either of the Weekly Firework Missions freerolls by either being dealt pocket Queens ten times at the cash game tables during the week, or by winning fifteen games of Twister with a minimum €2.00 buy-in. Again the tournament tickets will be awarded automatically, but you will have to manually register for the tournament of your choice.

Qualifying for the €25,000 playable Firework Missions Final on Sunday December 3rd at 8:00pm is relatively straightforward (there is no All-In Shootout Final). All you have to do is qualify for and play in ten daily Firework Missions freerolls. It does not matter whether you play in the daily playable freerolls or the daily All-In Shootouts, or a mixture of both – your entry ticket will be awarded automatically; although manual registration is again necessary.

If you are playing at one of the iPoker skins not running the Firework Missions promotion, you are missing out on the opportunity to win a share of €100,000 this month – and much more. Everest Poker hosts site-exclusive promotions such as the Everest Rewards Tournaments that pay out €20,000 every month plus the site will give you a whopping 200% bonus up to €1,500/£1,200 on your first deposit.