PokerStars is offering players the opportunity to win a package to the PokerStars Caribbean Adventure in a free Spin & Go game located on their Facebook page. 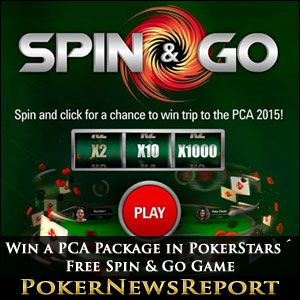 PokerStars is offering players the opportunity to win a package to the PokerStars Caribbean Adventure in a free Spin & Go game located on their Facebook page.

The 2015 PokerStars Caribbean Adventure may still be a couple of months away (it runs from 6th of January to 14th of January), but the world´s largest online poker site is encouraging players to qualify early with a series of recently launched promotions.

Visitors to the PokerStars PCA web page are offered free PCA satellite tickets if they make a deposit of $50 or more (before the 9th of November using the PokerStars bonus code “PCA2015”), told how they can qualify for the PCA by using their Frequent Player Points, and there is even a dedicated page on the new PokerStars Women events which start this Sunday (2nd of November).

However, another promotion is also available to players who follow PokerStars on its Facebook page – a variation on PokerStars´ popular Spin and Go game that offers players the chance to go to the Caribbean for free, and take two friends along with them!

Play Spin and Go to Win a Trip to the Caribbean

The Spin and Go game involves clicking on PokerStars chips as they fall into three scoring zone circles. Each circle has a multiplier value which is assigned in a random spin prior to the start of the game (similar to the way in which the prize money for a Spin and Go cash game is determined on PokerStars) and, at the end of the 30-second game, your score is calculated and revealed on the screen.

Subject to a “qualifying score” you are invited to submit your score for entry in a prize draw which will reward the winner with:

The winner of the prize draw will also be able to nominate two friends to come along with them – each of whom will receive nine nights’ accommodation and $750 towards their travel costs. Please note that if you intend entering the contest you must have an account with PokerStars as part of the submission process involves including your player ID.

If you do not have a PokerStars account yet, please take a moment to read our review of PokerStars and register for an account using the marketing code “[bonuscode room=”pokerstars”]” to qualify for a 100% bonus on your first three deposits up to $600. Unfortunately this promotion is not available to players in Spain, Italy or France.

Instant and Weekly Prizes also up for Grabs

PokerStars´ Spin and Go game is also offering daily instant prizes and weekly prizes for the players who score highly in the game. Each day throughout the duration of the competition, an “Instant Win Chip” will be randomly released into five of the games. If you click on the “Instant Win Chip” as it falls into the scoring zone, you will win a Black Spade card protector.

There are also prizes of a double deck card set and a Black Chip hat for the ten players who achieve the highest individual scores each week; and you can monitor your progress by reviewing the leaderboard after submitting your score. There is no limit to the amount of times you can enter PokerStars´ Spin and Go game on Facebook, but you can only win one instant or leaderboard prize each week.

The competition – which can also be played on mobile devices with a touch screen – runs until Wednesday 3rd of December, and the winner will be drawn on Thursday 4th of December. Get clicking!