Win a Package to the Poker´EM Main Event at Intertops

Poker´EM is an annual live poker festival held at the stunning Casino Velden in Austria. Featuring seventeen prestigious tournaments and a “Cash Game Championship”, the festival attracts players from all over Europe. This July, you could be part of the action if you take advantage of Intertops Poker´s latest promotion. 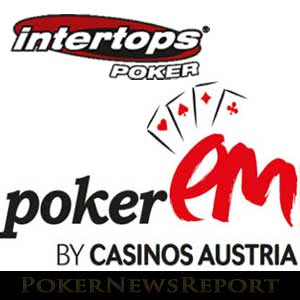 Poker´EM is an annual live poker festival held at the stunning Casino Velden in Austria. Featuring seventeen prestigious tournaments and a “Cash Game Championship”, the festival attracts players from all over Europe. This July, you could be part of the action if you take advantage of Intertops Poker´s latest promotion.

European poker players are very fortunate to have so many fantastic live poker venues to play at. As well as the glamour of Monaco, the culture of Barcelona and the history of London, there are great “centres of poker” such as the Holland Casino in Amsterdam, the Kings Casino in Rozvadov and the Dusk till Dawn Poker Club in Nottingham.

With so many to choose from, it is not surprising some excellent venues go relatively unnoticed. One in particular – the Casino Velden in Austria – certainly demands a higher profile due to its stunning location, facilities and micro-climate. Indeed, during the summer months, the lake overlooked by the casino is actually warmer than the Mediterranean Sea.

Since 2014, the Casino Velden has been home to the Poker´EM festival – a well-organized live poker festival comprising of six “European Poker Championship” events, eleven valuable side events, and a “Cash Game Championship”. This year´s festival takes place between 18th and 29th July – with the €2,700 buy-in Main Event getting underway on 26th July.

Last year´s Poker´EM Main Event saw 236 players taking part in the event – creating a prize pool of €590,000. The appropriately named Swiss player – Simon Boss – topped the field for the second time in three years, taking home a first prize of €120,000 after a final table deal. In total, 27 players cashed in the Poker´EM Main Event – a min-cash being worth €6,500.

It was also the second time in three years that Intertops Poker had sent players to the festival via a special promotion offering the buy-in to the Poker´EM Main Event, five nights´ accommodation for two in a nearby hotel, and $500 towards travelling expenses. This year, you could be representing the Intertops Poker team if you are successful in the site´s latest promotion.

Starting next Wednesday (April 25th), Intertops Poker will be hosting two-step qualifiers to an EPC Velden Final on May 6th. The two steps have buy-ins of $3.30 (five times daily) and $9.90 (daily at 7:30pm CET), or players have the option of buying directly into the Final for $110.00 – which guarantees at least one package to the Poker´EM Main Event.

If you are interested in attending the Poker´EM festival, this is definitely a promotion you should be looking at. Intertops Poker caters for players from all over the world; but, as the festival starts immediately after the World Series of Poker, few US-based players will be up for a trip to Europe. It will also be expensive for them due to the timing of the festival coinciding with peak European holiday time.

Furthermore, similar to the Casino Velden, Intertops´ live events qualifiers go relatively unnoticed. When the site recently hosted a similar promotion offering a [geolink href=”https://www.pokernewsreport.com/intertops-poker-wants-to-send-you-to-milli-maker-event-22283″]package to the WSOP Millionaire Maker[/geolink], just seventeen players qualified for – or bought directly into – the Final. The eventual winner of the package – Randy “coddfish7” Codd – won his prize within 45 minutes of late registration closing.

Intertops Poker May be Small, but You Can Still Win Big

Intertops Poker may be a relatively small site when compared with the goliaths of PokerStars, Party Poker and 888Poker, but that does not eliminate the possibility of winning big. Indeed, some would argue that – because the site is quieter – the chance of enjoying a profitable session is better. Regardless of whether this is true, there are multiple good reasons for playing at the site.

Intertops Poker not only hosts promotions that send players to live poker events, but offers players a packed tournament schedule, a good choice of games, and one of the best player reward programs in the industry. If you have never played at the site before, it also offers a generous welcome bonus of 200% on your first deposit up to a maximum bonus of $1,000.

Further details of how to qualify for the bonus – and the other advantages of playing at the site – can be found in our [geolink href=”https://www.pokernewsreport.com/intertops-poker”]Intertops Poker Review[/geolink]. If you are tempted by the bonus – and the opportunity to play in the Poker´EM Main Event – do not hesitate to visit the site soon. The two-step qualifiers for the EPC Velden Final start next Wednesday and could be your chance to win a life-changing amount for an investment of just $3.30.