Win $1 Million From Just One Hand of Poker

Play just one hand of poker and win $1 million. It sounds too good to be true, doesn’t it. But that’s exactly what’s on offer at American casino Caesars. 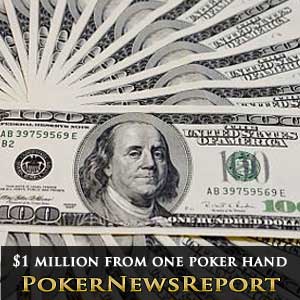 Here is an incredible deal. Play just one hand of poker and win $1 million. It sounds too good to be true, doesn’t it. But that’s exactly what’s on offer at American casino Caesars.

Jeff Kowalchuk, the Caesars Entertainment director of corporate table games, is certainly “excited to offer the first-ever table game with an instant jackpot of this size”.

With an exclusive deal at Caesars’ Las Vegas resorts starting this month, poker players can scoop that seven-figure sum when playing one hand of Three Card Poker, which has already been established as an extremely popular specialty game in casinos.

Of course, it’s not that simple or everyone would be winning a million bucks. So players must wager a minimum of $15 on a 6 Card Bonus side bet while also playing Three Card Poker. But, if anyone hits a Super Royal – otherwise known as a Royal Flush (9-10-J-Q-K-A) – that life-changing prize is all for them.

Wait, though, there is yet another catch. The Super Royal hand can’t be any old Royal Flush. It has to be in diamonds, although any other suit will still bag them $100,000. Not bad, huh.

Expert analysts – whoever they are – believe that there could well be a $1 million winner about three times every 12 months. OK, so the odds aren’t great, but it could be worth a go, don’t you think?

Three Card Poker is one of the fastest growing forms of poker in the world, mainly due to its simplicity, as well as comparatively high payouts from small table minimums, while the 6 Card Bonus side wager allows players to hopefully improve a good hand or at least transform a poor hand into successful one.

Kowalchuk says Caesars’ “goal is to create a new and exciting concept that has never been seen in table games before” – that of “a $1 million payout that will attract new table players, and offer a jackpot comparable to what you see in progressive slots”.

He also believes that, as “Three Card Poker is one of the easiest and most popular table games played in casinos today”, it seems that “creating the new 6 Card Bonus wager with a $1 million payout is a natural fit”.

Not quite in the same league, but definitely interesting is Hank Azaria’s latest home poker game.

Hank is best known as the voice of Simpsons characters Moe Szyslak, Apu Nahasapeemapetilon, police chief Clancy Wiggum, among others – but the 47-year-old is also an avid poker player.

Hank, who finished just a few places outside the money at last year’s main event at the World Series of Poker, recently held a big event in his back yard, with almost 170 players competing for a $10,000 seat to this year’s WSOP main event.

Among those taking part were actors Ben Affleck, Kevin Pollak and Don Cheadle, although it was businessman Rich Sondheimer – playing in just his second poker tournament – who picked up the top prize.