Scotland´s Willie Elliot caught plenty of Aces on the penultimate day of the UKIPT Nottingham Main Event to take the chip lead into today´s Final Table. 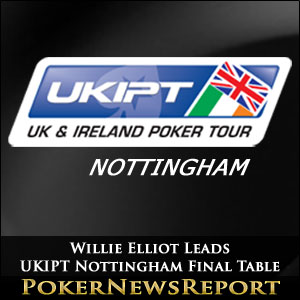 Scotland´s Willie Elliot caught plenty of Aces on the penultimate day of the UKIPT Nottingham Main Event to take the chip lead into today´s Final Table.

Day 3 of the UKIPT Nottingham Main Event started with 49 players chasing a seat at the final table and a chance of winning the £218,300 first prize. Almost nine levels of action later, the field was reduced to a final table of eight – lead by PokerStars qualifier Willie Elliot.

Elliot played a patient game throughout the day, but also enjoyed his fair share of good fortune – catching plenty of Aces when he needed them to finish the day with 5,625,000 chips – 15 Big Blinds ahead of his closest rival, Spain´s Juan Benito (4,385,000 chips).

Willie Elliot had entered Day 3 of the UKIPT Nottingham Main Event well-stacked in third place behind Benito and fourth-place finisher in last November´s UKIPT Nottingham Ben Vinson, and he quickly moved into the chip lead when his A♠ K♠ made a Full House to bust Mike Panteli in forty-sixth place.

Juan Benito returned to the top of the leaderboard when eliminating Mitch Johnson in twenty-fourth place A♠ 10♥ > J♣ 9♣ and Lewis Swift in twenty-third place pocket Sevens > pocket Fives, but Willie Elliot had not finished hitting Aces and, on his way back into the chip lead, Elliot rivered an Ace to bust Joeri Zandvliet in sixteenth place A♥ J♦ > K♠ K♦.

Against the run of play, an ace-less board saw Tim Blake double-up against Elliot K♣ K♠ > A♥ J♣, but Elliot continued sending players to the rail – James Glossop departing in twelfth place A♦ 2♣ < Willie Elliot´s 5♣ 5♠, before the Scotsman got his revenge on Tim Blake for the earlier double-up, and busted him out in eleventh place A♣ 7♦ > Q♣ 9♦.

The unofficial final table of nine was set when Elliot flopped another Ace to eliminate Dafydd Williams A♣ J♥ > K♦ Q♠, and the final eight was decided one hand later when Terry Carter shoved all-in with pocket Kings and received a call from Ryan Spittles with pocket Aces. Carter hit a King on the flop to take the lead in the hand, but Spittles Turned an Ace for a better set, to finish with 3,305,000 chips – good enough for fourth place overnight.

Also making an appearance at the final table is the winner of the first UKIPT Event to be hosted on the Isle of Man – Duncan McLellan. McLellan won his final table last November on a record-breaking four hours (apparently he had a ferry to catch) and the manner of his play yesterday suggested that he was in a hurry once again.

McLellan started Day 3 of the UKIPT Nottingham Main Event badly, losing half his chips to Daffyd Williams K♥ 2♥ > 6♠ 6♣, but recovered well to cripple Arvin Ravindran with a Full House > Nut Flush, and then send his table-mate to the rail with trip Kings > Ravindran´s pocket Tens. McLellan endured a see-saw day, but found the luck when he needed it, and he booked his seat at the final table when flopping a flush with 4♠ 3♠ to double up against Ramey Shaio´s A♥ 8♦.

Looking Ahead to the UKIPT Nottingham Final Table

When the Final Table gets underway at the Dusk till Dawn poker club in Nottingham at 2.00pm (BST) this afternoon, the eight remaining players will have a few hands left to play in Level 28 (blinds 40,000/80,000 – ante 10,000). Dusk till Dawn regular Trevor Pearson goes into the concluding day as the short stack with just twelve big blinds, but he does at least have position on chip leader Willie Elliot.