Will Zynga Entrance into Online Poker Make Any Difference?

Zynga Poker may shortly enter the world of real money online poker. PokerNewsReport asks how much difference their presence will make. 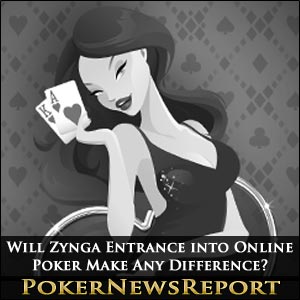 Zynga Poker may shortly enter the world of real money online poker. PokerNewsReport asks how much difference their presence will make.

For those who avoid Facebook like it was a terminal disease, Zynga is a software provider whose play money poker application has 33.8 million active players and an online player average five times the size of PokerStars´ play money site. Zynga Poker is not just limited to Facebook, and the game can be played on Android Smartphones and through the Zynga Poker web site.

For anybody who does not understand the modern terminology (so, most people over the age of forty), all you need to know is that if the amount of play chips that Zynga Poker pays out in a day was converted to dollars, it would pay off the U.S. National Debt in a little under 24 hours. Furthermore, if just 25 percent of Zynga Poker´s current play money traffic converted to real money games, it would create an online poker site that dwarfed PokerStars – that is how big it is.

Speculation has been around for some months that Zynga have been looking to enter the world of real money online poker by developing their own real money poker program, taking over an established site or out-sourcing to an existing software company to provide a cash gaming platform for its substantial database of players. Online poker players have followed the developments with interest – welcoming the prospect of 33 million fish into an ever dwindling player pool.

Rumours circulated that, after Shuffle Master pulled out of a deal to purchase the OnGame Network last month, Zynga Poker was ready to step in and take over the network which Bwin.party considers to be a “surplus asset”. However, media reports have also emerged this week that PlayTech (software providers for the iPoker Network) and G2 Tech (who provide the software for the International Poker Network – IPN) have also submitted bids to provide Zynga Poker with a real money poker platform. So it looks as if Zynga Poker´s entry into real money poker is about to become a reality.

However, what difference will a cash game Zynga Poker actually make? Some cynics have actually suggested that Zynga Poker´s entry into the world of real money poker might actually be detrimental by, at best, providing a temporary boost to the number of recreational players indulging in real money online poker and, at worst, thinning out existing player databases. They cite three main reasons why the entry of Zynga Poker into real money poker is unlikely to succeed.

The arguments are compelling when the emotion is taken out of the news that Zynga Poker will be opening a cash game platform, and has prompted analysts to advise investors against putting their money into Zynga shares – which have fallen from a high of $15.91 at the beginning of the year to a current trading mark of around $5.00 – despite the company generating $1.14 billion in revenue last year.

It might also be the case that players from Zynga Poker may not be as fishy as the rest on the online poker world would like to think they are. A team from Zynga Poker competed in the inaugural Nations Cup last year – finishing a commendable fourth. Consequently, it could be argued that Zynga Poker´s entrance into the real money online poker community will have minimal effect on the number of players seated around the tables and that those hoping for a huge influx of fishy players could well be in for a nasty shock!