Will Jaffe Charges Into Lead After WSOP Event #54 Day 2

American Will Jaffe made a late charge to end Day 2 of the $1,000 buy-in No-Limit Hold’em event #54 at the World Series of Poker as a huge chip leader. 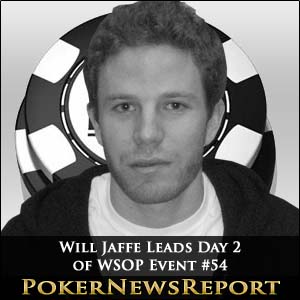 American Will Jaffe made a late charge to end Day 2 of the $1,000 buy-in No-Limit Hold’em event #54 at the World Series of Poker as a huge chip leader.

Jaffe took down a huge 1.3 million pot just half-an-hour from the end of play when knocking out Gianluca Rullo, of Kansas, before winning a vital pot against Michigan’s David ‘Bakes’ Baker to confirm his place as chip leader heading into Day 3.

British pro John Eames eliminated German star Martin Finger in 167th for $2,667 when the former’s pocket queens proved too good for the latter’s pocket fours, although Eames would eventually exit in 18th for $17,915 after Canadian Jonas Mackoff (49th for $7,798) had sent New Jersey’s Matt Stout to the rail in 156th for $2,667.

All the while, Jaffe was increasing his stack, with two-time bracelet winner Dutch Boyd, of Vegas, the first to suffer when his pocket queens lost out to the former’s jacks after the J♦ arrived on the turn. Jaffe took over as chip leader, although he would lose that spot before claiming it once again late in the day.

The action hotted up after the dinner break as Baker moved top when Eames doubled-up through Jaffe, before two more bracelet winners hit the rail in quick succession as Michigan’s Ray Foley (30th for $11,567) and Russian Alex Kravchenko (33rd for $11,567) were eliminated as the final two levels approached.

Baker – who ended the day in fifth on 574,000 – gained even more momentum when winning a huge pot against Indiana’s Jeff Fielder before then knocking out San Francisco’s Wendy Freedman (26th for $14,321) to move past the one million-chip mark.

Several other women made it into Day 2 but all were eliminated, with Sweden’s Sofia Lovgren exiting in 24th and Vegas-based Katherine Dozier picking up 27th – both for $14,321.