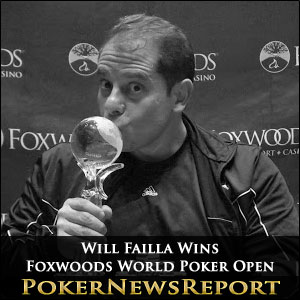 The World Poker Open Main Event is one of the most popular live poker events to be played at the Mashantucket casino, and this year was guaranteeing a $500,000 prize pool for the twentieth anniversary of the $2,700 buy-in tournament.

The Main Event attracted 302 players including PokerStars pro Vanessa Selbst – who made it through to Day 2, but who was busted out well-before the money bubble burst when the field was reduced to thirty-six players – and by the start of Day 3 just twelve players remained.

The ten-handed final table was set after the quick eliminations of Michael Nigh and last woman standing Delores Wightman, with Daniel Chan having a significant chip advantage.

With blinds of 15,000/30,000 (ante 4,000) there were several players in a perilous position, and it did not take long for the short stacks to put their tournament life on the line. Ramy Ibrahim was the first player to leave the Foxwoods World Poker Open Main Event when he ran his A♠ 10♠ into the A♦ K♠ of Chris Orme, and David Paredes was eliminated in ninth by Tom Thomas after being crippled in a previous hand by Daniel Chan.

Steve Dakota Happas was busted in eighth when his A♦ 10♦ failed to connect with the board to improve past Carlos Chadha´s 9♠ 9♣, and a successful double-up by Will Failla against Chan enabled him to just have enough chips to call Bob Ricciuti´s shove with A♥ K♥. Failla turned over K♣ K♦ and, with no Ace on a board devoid of Hearts, Ricciuti was sent to the rail in seventh.

A big pot against Tom Thomas saw Will Failla climb into the chip lead, but Thomas recovered to eliminate James Magner in sixth A♥ 10♦ > K♥ Q♥, before Failla extended his advantage by busting out Carlos Chadha 7♣ 7♠ > A♥ J♦. With just four players remaining, Daniel Chan was now the short-stack, and he got the last of his chips in with K♥ 7♥ but failed to find the King he needed to survive against Tom Thomas´ J♦ J♥.

Three-handed play continued for an hour before a deal was agreed which saw Will Failla declared the winner ahead of Tom Thomas and Chris Orme based on their respective chip stacks. The deal enabled Failla to pick up his fourth first place finish of 2012, after two victories in the Borgata Poker Open and one in the opening celebrations of the VIP Poker Room in Montreal, but robbed railbirds of what could have been an intriguing climax to this popular event.