Will “The Thrill” Failla became the first player to win five Borgata Open titles when taking down Event #6 in the current Borgata Poker Open series. 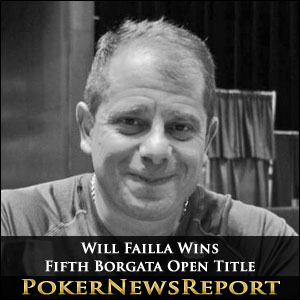 Will “The Thrill” Failla became the first player to win five Borgata Open titles when taking down Event #6 in the current Borgata Poker Open series.

Event #6 of the Borgata Poker Open was an extremely tough tournament – partly due to the 159 players who entered or re-entered the $1,090 buy-in NL Hold´em event, and partly due to the quality of the players who took part in it. It took 16 hours on Day 1 to reduce the field to the 18 players who would cash in the event and return to the tables on Day 2, and another 14 to determine who the winner would be.

Failla took down the event eight hours after the game went three-handed; defeating Jonas Wexler in the heads-up to claim the $46,269 first prize and extend a run of victories which first started in September 2007. Will Failla has also appeared at eleven Borgata Poker Open final tables (without winning) during his incredible sequence of results, and this victory took his career live poker winnings to pennies short of $4,000,000.

A $2 million guaranteed prize pool in Event #1 attracted an incredible 4,482 entries for the $560.00 buy-in NL Hold´em tournament. After three days of action (including a very long Day 2), the eventual winner was Staten Island car salesman Maksim Rozenfeld, who collected $363,091 for his victory.

Online grinder Eric “rappy300” Rappaport made the long journey from Mexico worthwhile when collecting $45,183 in Event #4. Rappaport finished on top of 345 players who entered the $560.00 buy-in Deepstack NL Hold´em event and battled to victory after a two hour heads-up encounter with runner-up Vitor Coelho from Florida.

The Borgata Poker Open runs until September 20th, with the climax of the 25 event series being the (confusingly titled) $3,500 buy-in WPT Borgata Poker Open. The first of two opening flights for the $3 million guaranteed “Main Event” gets underway on Sunday 15th September, where you can expect Will Failla to be gunning for his sixth Borgata Poker title.