Online poker insurance tool website Bubble Protection have revealed that Will Failla will be their latest spokesman. 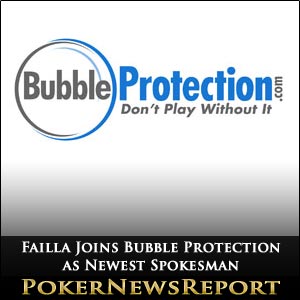 Online poker insurance tool website Bubble Protection have revealed that “one of the most talented tournament players” in the world, American pro Will ‘The Thrill’ Failla, will be their latest spokesman.

The company’s creator and chief executive officer Eugene Castro is delighted to have Failla on board – to join other spokesman Chris Moorman – as the world’s leading online poker tournament entry fee protection and indemnity firm aims to expand their market still further.

Castro, as reported by igamingbusiness.com, reckons Failla’s peers recognise him as being “one of the most talented tournament players in the world”, while also respecting him as “one of the most popular people on the pro tour”.

The CEO added that Failla “makes one of the more frustrating endeavours we engage in a bit more tolerable due to his infectious laugh, hilarious off-the-cuff remarks or a simple pat on your shoulder”.

Company CEO is ‘Very Proud’ to Sign Up Failla

Castro also stated that Bubble Protection were “very proud” to have the 44-year-old join Englishman Moorman – a 13-time World Series of Poker (WSOP) cash finisher – “as our second company spokesman”, with the company chief happy to know “that having him aboard will bring respect and credibility” to his business.

We at Poker News Report reckon Castro is correct in his assumption as the 15-time WSOP in-the-money finisher is a quality player and all-round good guy.

For his part, Failla said he was “very pleased to associate myself with Bubble Protection”, particularly because he has “known and trusted the principals of the company for many years”.

He made sure poker fans across the globe know just how impressed he has been by the online tool that safeguards players’ entry fees and bankroll from suffering by finishing in the dreaded ‘bubble’ spot in a tournament.

The one-time World Poker Tour (WPT) champion added that he understands and believes the company “when they state that Bubble Protection is a sustainable business model while simultaneously being positive EV (expected value) for their users”.

He concluded by saying that he is a “true supporter of the technology” and can’t wait for a “time when I can use Bubble Protection in the United States” – following what millions of people in the USA hope will happen if the government backs law changes that will legalise online poker in the North American country following the dark days that have followed Black Friday last April 15.

However, he maintained that he would, “until that time…proudly endorse the product in my travels, both here and abroad”.

It is worth noting that Failla has secured more than $4 million from his live tournament poker career, with his first cash coming back in July of 2005 when he picked up $28,375 for finishing 234th in the World Series of Poker (WSOP) $10,000 buy-in No-Limit Hold’em main event.

The Smithtown, New York, native has, however, multiple titles from online and live tournaments, including one WPT crown for $758,085 – his biggest cash haul – from the $3,500 No-Limit Hold’em main event at last August’s Legends of Poker in Los Angeles.

That success has helped take Failla – the Global Poker Index (GPI) 300 world number seven – to the top spot on the WPT rankings list, while he also pocketed a healthy $241,950 for taking down the $2,000 No-Limit Hold’em event at the PokerStars Caribbean Adventure (PCA) on Paradise Island in January of last year.

Other notable payouts, among many, recorded by Failla include seeing off the challenge of 1,872 opponents to the $165,053 top prize for winning last month’s Borgata Winter Open $500 buy-in No-Limit Hold’em Deepstack Re-Entry event – the opening tournament in Atlantic City – picking up $207,968 after securing the $4,800 No-Limit Hold’em event at the Foxwoods Poker Classic in Mashantucket back in March of 2007, and $218,805 for taking down the $1,500 No-Limit Hold’em $300,000 Guaranteed Poker Tournament, also at the Borgata Hotel Casino & Spa, five months further on.

Failla has also enjoyed some significant successes at the virtual felt of online poker, with the pro, under the moniker ‘WILLY-RUGS’, pocketing $106,128.40 for winning the now-beleaguered Full Tilt Poker’s Sunday Brawl from a starting field of 2,614 players back on March 13 last year as his most prestigious poker room triumph.

Incidentally, the Bubble Protection tool provides internet poker players with an opportunity to cover tournament buy-ins by paying a fee – approximately 12% of the  buy-in for any tournament – in the hope that will ease any concerns over bankroll losses and allow more freedom to play well.