Will Day 13 on FTOPS XXI be Lucky for You?

Put the plans for an office party on hold! There is a big Friday night full of action on Full Tilt Online Poker Series Day 13 and $170,000 up for grabs! 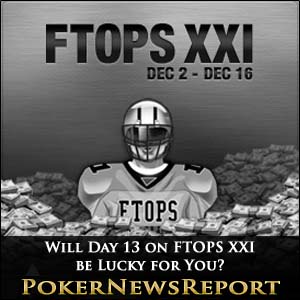 Put the plans for an office party on hold! There is a big Friday night full of action on Full Tilt Online Poker Series Day 13 and $170,000 up for grabs!

It is a Friday and it is the 13th day of action at FTOPS XXI, with two superb guaranteed prize pool tournaments being more than just a prelude to the main events still to come at the weekend. Indeed, today´s tournaments promise to be two of the most popular scheduled in the whole of the Full Tilt Online Poker Series!

3,584 players have contested the five Rush poker events played so far in the series – proving that tournament Rush poker is taking off in a big way. FTOPS #29 promises to be one of the most hotly contested of them all, being a $216.00 one re-buy and add-on game with a $150,000 guarantee and played on a full ring.

The tournament starts at 11.00am server time/4.00pm GMT and players only get 2,000 starting chips. The one permitted Re-buy is allowed when a player´s chip stacks fall below 2,000 chips and an add-on of 2,500 chips will be available at the end of Level 10 (6 minute levels) – which happily coincides with the end of the late registration period.

The $216.00 Double Stack FL Omaha Hi/Lo FTOPS #30 at 14.00pm server time/7.00pm GMT may only offer a $20,000 guarantee, but will probably be equally as popular as the preceding Rush event.  Players start with 4,000 chips and 12-minute blinds (rising to 15-minutes and 20-minutes as the tournament progresses) and late registration is allowed for two hours through to the end of Level 10 – so do not expect an early finish to this event.

Out of interest, up until FTOPS XX (when the FL Omaha Hi/Lo tournament was shuffled up near the beginning of the schedule), this event would often see fields in excess of 800 players and has been won in the past by such notables as Brandon Adams, Jordan UgA7211 Young and Casey CaseyTheKid Griswold who won back-to-back FL Omaha Hi/Lo FTOPS events in August 2006 and February 2007.

We are just going to focus on the big last minute satellites with guaranteed seats to the target events, but players searching for a little bit of value should keep their eyes focused on the FTOPS Lobby for any qualifiers which look potentially undersubscribed – especially early morning ones before the former USA Poker players now living in the “other” Americas get out of bed.

The big last minute satellite to FTOPS #29 is a $55.00 Turbo NL Hold´em tournament (no re-buys) which offers 15 seats guaranteed for the target event. The cards are in the air for this last minute satellite at 8.00am server time/1.00pm GMT and, if you are a sleepy-headed Canadian, late registration is available until the end of Level 6 (30 minutes).

The buy-in is also $55.00 for the Turbo FL Omaha Hi/Lo qualifier that starts at 11.30am server time/4.30pm GMT. 10 seats are guaranteed in this last minute satellite, which also has a 30 minute late registration period but a very steep blinds structure!

It was a day of contrasts on Day 12 of the Full Tilt Online Poker Series yesterday. One of the best supported midweek tournaments was followed by one of the worse, a poker refugee with a difference collected first prize in one, while a “real” Canadian won the second.

We said in yesterday´s FTOPS XXI preview that the “no bells or whistles” NL Hold´em FTOPS #27 would likely be one of the most popular tournaments of the series – and so it proved. 1,464 players paid the $109.00 buy-in or qualified for the tournament through the last minute satellites, making it the best supported non-weekend tournament of the series so far and generating a prize pool of $146,400 – almost three times the guarantee which had been advertised for the event.

If you have been following the FTOPS results on PokerNewsReport, you may have noticed that we have focused quite a lot on former USA players who have played in the tournament series from neighbouring countries. Well, the winner of FTOPS #27 was a poker refugee with a difference.

After 10 hours of play, and a three-way final table deal, Willy Wilmy_x Aranzadi collected the $22,659 first prize, gold FTOPS jersey and champion´s avatar – having just moved to Portugal to play in the series from Pamplona in Spain, where Full Tilt Poker did not attempt to get a licence from the Spanish government to provide online poker (and after the Spanish government screwed PokerStars out of $257 million in retrospective taxes, do you blame them?).

In contrast to the well supported NL Hold´em tournament, just 245 players entered the $322.00 buy-in Razz FTOPS #28 – more than enough to shattered the Scrooge-like $20,000 guarantee, but making it an early night for Toronto born Mike GoLeafsGoEh Leah who became the first “real” Canadian to take down a FTOPS event in this series.

Leah, who already has a WCOOP bracelet and who took down the NL Hold´em Rush Turbo in FTOPS XVIII, is an example to every recreational player who wants to turn pro. He took up poker at the age of 37 and (after making sure he was financially secure) abandoned a sixteen year career in sales to turn pro. Since then, Leah has won more than $1.5 million in live poker tournaments and now more than $2.5 million online.

In the climax to the tournament, Mike Leah took an early advantage against online Razz specialist Damian gieras Gieras and wore down the Pole to take the $19,477 first prize (almost as much as the guarantee for the tournament) with Gieras – who makes a decent living on Stars playing Razz – collecting $12,936 for his second place finish, his biggest individual cash of the year.

Because of the way in which points are awarded in the FTOPS XXI Leaderboard competition, many of the players who cashed in FTOPS #27 were not awarded points while some who were out of the money in FTOPS #28 managed to improve their position. Consequently callyoudownn increased his lead at the top of the leaderboard despite being two places off the money in the Razz tournament.

Make sure you keep up to date with all the FTOPS action and changes to the Leaderboard competition by following PokerNewsReport on Twitter.