What the Doctor Ordered for WSOP Event #13 Champ David Arsht

Veteran physician David Arsht has racked up another success for the older poker player with his win in event #13 at the WSOP in Las Vegas. 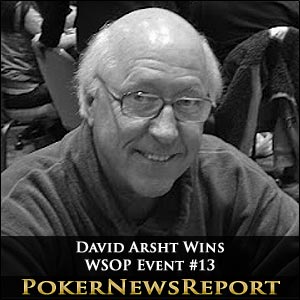 Veteran physician David Arsht has racked up another success for the older poker player with his win in event #13 at the World Series of Poker (WSOP) in Las Vegas.

The 66-year-old from Pennsylvania – who is known as ‘Doctor Dave’ – emerged victorious from the 730-player field that assembled for the $1,500 buy-in Limit Hold’em tournament in the Rio All-Suite Hotel & Casino’s Amazon Room to collect his first gold bracelet and the $211,921 top prize.

The semi-retired urologist – who made an impressive comeback from just four big blinds at the start of Day 2 – certainly wasn’t holding back when he defeated Californian Stephen Hung in their heads-up clash that saw the runner-up collect $130,921 on the final day of the event.

A lengthy battle ensued when play became four-handed, but – once Colorado’s Donald Auger was eliminated in fourth for $61,820 and California’s Al Barbieri exited in third for $84,388 – a swift heads-up clash brought the event to a thrilling close.

The final hand of an 11-hour day saw Arsht raise and Hung make the call to see a Q♥ J♦ 6♦ flop. Hung check-called Arsht’s bet for the Q♣ to arrive on the turn. A raising war followed that saw Hung move all-in with Q♠ 3♥ and Arsht call with the dominating Q♦ 10♣.

While both had made trip queens, Arsht’s ten kicker had him ahead, leaving only a three available for Hung to win the pot or a six or jack for a chop. However, the river came down 4♥ and Arsht was crowned champion.

It has definitely been a good series for the older gentleman so far, with Tapscott defeating Triple Crown winner Gavin Griffin to the title.

Back to event #13, and the final day began with 25 survivors from the original field, with all guaranteed to make the money after the cash bubble burst the previous day.

Eliminations arrived quickly early on, with five players hitting the rail in the first level, before Vegas’ Isaac Haxton was knocked out in 20th place for $6,652. Haxton’s exit was the first at the final two tables, but fans’ favourite Jennifer Harman, who picked up $8,130 in 18th place, quickly joined him at the rail.

Jennifer Harman Out in 18th

Reno’s Harman was short stacked when she got all her chips in pre-flop while holding Q♠ Q♣ start-of-day chip leader Leonid Bilokur’s A♠ K♠ for a coinflip. Unfortunately, for Harman, the flop came J♣ 2♠ K♦ to pair the Russian’s king to leave the American needing a queen. But the 4♠ turn and 6♠ river were no good to Harman, although this was her first cash of the 2012 series.

Thereafter, the exits arrived quickly, with Moscow’s Bilokur hitting the rail in 15th place for $10,111 and New York State’s Roland Israelashvili crashing out in 10th for $12,535.

With the nine-handed final table now set, Wisconsin’s Ben Landowski started as chip leader on 574,000, although no one was giving up on the chance for WSOP glory as the first elimination didn’t arrive for almost an hour, when California’s Al ‘Sugar Bear’ Barbieri sent Phoenix’s Lori Kirgan to the rail in ninth place for $15,886.

Barbieri raised to 40,000 and the short-stacked Kirgan threw in her last 38,000 chips, before the action folded for a showdown. Kirgan revealed A♥ J♥ while Barbieri showed 4♥ 4♦ ahead of the K♥ 3♣ 2♦ flop. There didn’t appear to be anything exciting about the flop, but that all changed when the 5♣ turn and 6♦ river handed Barbieri a six-high straight to confirm Kirgan’s exit.

Barbieri scored the next knockout, too, sending Pennsylvania’s Alex Queen out in eighth place for $20,370. In the cut-off seat, Barbieri raised, only for button Queen to three-bet. Barbieri made the call to see a 8♣ 6♠ 5♦ flop. Barbieri then check-called Queen’s bet ahead of the 9♦ turn. Barbieri led out with 40,000 and Queen- with only a few thousand remaining – called for another showdown.

Barbieri showed A♣ 7♠ for a straight, while Queen tabled 9♥ 9♣ for a set of nines, leaving the latter needing the board to pair. However, the J♥ arrived on the river to send Queen crashing out.

Arsht notched the next scalp when eliminating Florida’s Jeff Weiss in seventh place for $26,401. From middle position, Arsht put in a raise and was called by small blind Weiss and big blind Barbieri. After a 2♠ Q♥ 9♣ flop, the action checked around to Arsht, who bet, while Weiss called his last 7,000 and Barbieri folded.

Weiss showed A♣ 10♣ to find himself behind Arsht’s A♥ 9♠ after his opponent had made a pair of nines. The J♠ on the turn gave Weiss an open-ended straight draw, but the Jh was no help and he was gone.

There was a dinner break soon after, and when the players returned Landowski suffered a swift downward spiral that resulted in his sixth place exit for $34,620, when his J♠ 8♠ couldn’t overcome the Q♠ Q♥ of Hung.

New Jersey’s Glenn Engelbert – who had enjoyed a succession of good cards to climb up the rankings – was the next to hit the rail in fifth place for $45,953 after he suffered a massive chip loss to Arsht that left him with just 6,000. Engelbert was gone in the next hand when Barbieri’s tens held.

Play slowed down during four-handed play, but the blinds quickly forced action to see a double knockout for Arsht. Arsht raised and Auger shoved all-in. Barbieri came along to have only 20,000 chips left, while Arsht made another raise to also put Barbieri all-in.

Auger showed 6♠ 6♦, Barbieri revealed J♣ 10♣ and Arsht tabled 7♠ 7♦ ahead of the 6♥ 4♥ 2♣ flop. Auger now had trip sixes, while Barbieri could still catch runner-runner clubs for the pot and a triple-up. The 5♣ turn provided Barbieri with his flush draw, but also gave Arsht a straight draw. Of course, the 8♦ arrived on the river to complete Arsht’s straight and send Barbieri (third for $84,388) and Auger (fourth for $61,820) to the rail.

Heads-up play was over quickly as Arsht, with a 5 to 1 chip lead over Hung, completed his triumph over only six hands.