Wesley Nobels has won the Mediterranean Deepstack Poker event by seeing off 149 other competitors at the Grand Casino in the Slovenian coastal town of Portoroz. 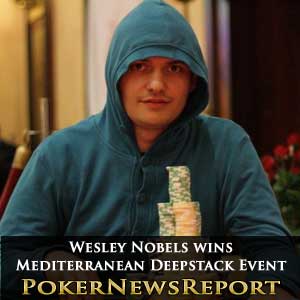 Wesley Nobels has won the Mediterranean Deepstack Poker event by seeing off 149 other competitors at the Grand Casino in the Slovenian coastal town of Portoroz.

The 21-year-old Belgian, who has proven to be a specialist in the longer game after cashing in two earlier deepstack main event tournaments promoted by D4 Events, overcame fellow countryman Raf de Wever in their heads-up clash to pick up €17,900 after making a deal prior to the first hand.

The final hand saw Nobels hold 7♥ 7♠ against de Wever’s Q♥ J♦. The flop came K♦ 7♦ J♠, so Nobels went all in after a J♥ turn and was immediately called by his opponent. The river came 10♦, so Nobels’ full house ended the game – much to the winner’s relief.

Nobels was obviously surprised by his success, stating that “it’s so sick, it’s so crazy”, before adding that “it feels very, very nice”.

Although Nobels did not get much sleep the previous night – “I think three hours” – he was so caught up in the game that, even if he “was tired the whole day”, his defeat of de Wever meant he finished the day on a high and was most certainly “not tired any more”.

The €550 buy-in main tournament wasn’t the only attraction, however, with Italian Giberto Duidi overcoming English duo Chas Chattha and Saigari Balasubramaniam to win the €300 event.

The Belgian Deepstack Championship is the next event on the schedule and will be held at the Casino de Namur, with the €525 main event running from July 28.

The tour then arrives in the UK following the Namur event, with Birmingham’s Broadway Casino hosting the English Deepstack Championships II from September 15-18.