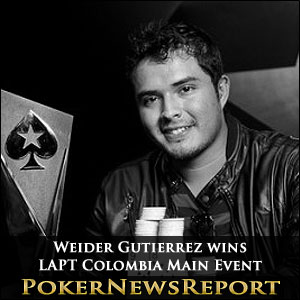 Gutierrez had started the day third in chips behind compatriot Miguel Velasco – who had recovered from having just three Big Blinds midway through the penultimate day to come to the eight-handed final table with a commanding advantage.

The field also contained PokerStars pro player Christian “El Grillo” de Leon from Mexico and a third Colombian – Mayu Roca – who had finished second to Leandro Csome in the LAPT Brazil in April and who had been Miguel Velasco´s main tormentor on Day 2, before the chip leader´s incredible recovery.

When play resumed for the conclusion of the LAPT Colombia Main Event, Velasco had more than double the average chip stack and – with blinds of 20,000/40,000 (ante 5,000 chips) – the three short-stacked players would be looking for a double-up pretty quickly.

Pastor Gets Ambushed by Cowboys – Twice

The final day of the LAPT Colombia Main Event will be one that Juan Manual Pastor will want to forget in a hurry. Having got his final 15 big blinds into the middle with pocket Tens, he was called by Miguel Moscoso – who had woken up with pocket Kings.

Never Rely on Aces in Colombia

Pastor´s elimination with an Ace in the opening hand set a theme for the rest of the day. Mayu Roca left the tournament in seventh after his A♠ 3♥ failed to improve against Miguel Moscoso´s 3♣ 3♦ and Pablo Luzardo (A♦ 6♥) fell to Miguel Velasco (10♣ 9♣) when Velasco rivered a Club Flush.

The themed continued when Alejandro Arrubarrena (A♣ K♠) was bust in fifth against Miguel Moscoso´s 8♦ 8♣, and within ten minutes Arrubarrena was joined on the rail by Christian de Leon who failed to improve past Miguel Velasco´s pair of Nines with Q♠ 10♥.

The deal lead to an incredible hand in which Miguel Moscoso (K♣ 5♣) got all his chips into the middle on a flop of 2♥ 6♣ 3♣ and was called by Miguel Velasco (A♣ A♠). The 7♠ on the Turn kept Velasco´s Aces in the lead, but the 8♣ on the River gave Moscoso his Flush and Velasco was out on third.

More Aces Drama in the Heads-Up

Miguel Moscoso took a 2.5:1 chip advantage into the climax of the LAPT Colombia Main Event, but his eagerness to wrap the tournament up quickly back-fired when he ran his pocket Fours into the pocket Eights of Weider Gutierrez and the size of the chip stacks was reversed.

Weider Gutierrez (A♦ 8♥) thought he had won the tournament when he called Moscoso´s shove with 8♣ 7♦ and the flop delivered A♠ J♥ 6♦, but the 4♦ on the Turn and 5♦ on the River gave Moscoso a runner-runner straight which beat the Colombian´s paired Ace and brought the two players practically level in chips.

The final hand was equally dramatic. Both players checked the flop of 6♥ 7♥ 2♣ but, following the Turn of 5♠ Gutierrez check-raised Moscoso up to 900,000 chips. Moscoso responded by announcing he was all-in and Gutierrez snap-called

Moscoso turned over 4♦ 3♥ for a 6-high straight, but Gutierrez revealed 9♣ 8♣ for the nut 9-high straight and, with the hand, took the title of LAPT Colombia Champion.