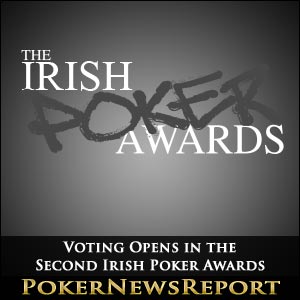 Following the success of last year´s inaugural event, the second Irish Poker Awards are being hosted at the Regency Hotel in Dublin on Sunday October 21st.

As with the British Poker Awards, a number of categories are determined by the voting public and the nominees for this year´s awards have just been announced. Two new categories for 2012 have been introduced – “Best Social Media User” and “Irish Poker Legend” – to replace “Best Poker League” (2011 Winner JP Poker League) and “Best Poker Festival”, as Boyle Poker (last year´s winners) are now sponsoring the event and PokerStars would have won the trophy by default!

The event is free to attend for Irish poker players in the Dublin area and voting/more information can be found on www.theirishpokerawards.com