In contrast to the traditional tub-thumbing that normally heralds the start of voting for the British Poker Awards, this year´s launch has been a subdued affair. 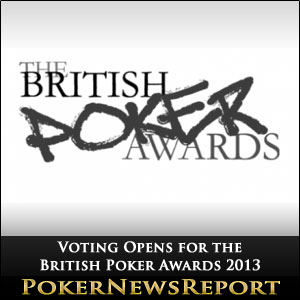 In contrast to the traditional tub-thumbing that normally heralds the start of voting for the British Poker Awards, this year´s launch has been a subdued affair.

The fanfare of press releases and Tweets announcing the British Poker Awards have been conspicuous by their absence this year despite voting having started several weeks ago – it is almost like the British poker-playing public have got nothing to celebrate.

Sure, there is no UK poker player in the climax of the WSOP Main Event and only four players feature in the top 100 of the GPI Index, but surely it was not that bad a year for UK poker players? Sam Trickett, David Vamplew and Barny Boatman have all had tremendous results on the live circuit, while Messers Moorman, Lewis and McCorkell continue to boss it on the virtual felt.

Thirteen Categories to Choose From

Voters are being asked to register their votes in thirteen different categories in the British Poker Awards web site, with two further awards being determined by a panel of judges and two more being voted on by invited professional players. The categories and nominees are as follow:-

No date or venue has yet been announced for the award ceremony, but voters have the opportunity of attending the star-studded event by liking the British Poker Awards on Facebook and being entered into a draw offering tickets to five lucky winners.