Voting Closes Next Week in the British Poker Awards

There is just one week to go in the voting for the 2013 British Poker Awards, so which player/venue/blogger/site has done enough this year to merit your vote? 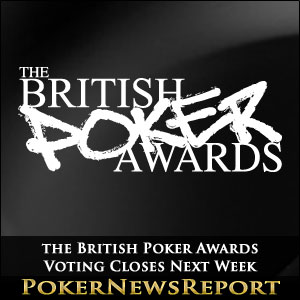 There is just one week to go in the voting for the 2013 British Poker Awards, so which player/venue/blogger/site has done enough this year to merit your vote?

Back in September, the categories and nominees for the 2013 British Poker Awards were quietly announced and, almost as quietly, voting is drawing to a close. Fortunately a couple of players/venues/bloggers/sites are doing a little bit of last-minute self-promotion, because otherwise the deadline for the poker-playing public to cast their votes might have passed unnoticed.

Readers can cast their votes in thirteen different categories over at the British Poker Awards web site, with four further categories – including a special “Lifetime Achievement” award – being decided by a panel of judges and players. So, who has caught the eye sufficiently to deserve the public acknowledgement of a trophy at the 2013 British Poker Awards?

A Few Things to Consider

Despite the valiant attempt on the British Poker Awards Facebook page to justify some support for Matt Perrins (“He´s a local lad from Rochdale and needs your support”), Stephen Chidwick´s recent performances in Prague have probably sewn up the “Best Live Tournament Player” Category.

Chris Moorman took some time away from the virtual felt to compete in the real world this year, but busting through $10 million in lifetime earnings in September was something special and, although there were some other notable achievements among the other nominees, the award for Best Online Tournament Player should already have Moorman´s name engraved on it.

Matt “He´s a local lad from Rochdale and needs your support” Perrins could be in the running for Performance of the Year after winning his second WSOP bracelet in the summer, but the popular vote is likely to go to Barny Boatman – who also won a bracelet at the WSOP this summer, but who – at his age – hasn´t got that much time left to win anything else!

And A Few More Things

One of the reasons for the public having a say in the destiny of the British Poker Awards is that the judges cannot decide for which Best UK Tournament Dusk till Dawn should be given the award (they are nominated for ISPT Wembley, UKIPT Nottingham and their own Grand Prix).

In the category of Poker Personality of the Year, voters should be asking themselves does Neil Channing ever smile if he is not receiving an award (or money)? Does Liv Boeree ever smile outside of PokerStars sponsored events, and does Sam Razavi ever stop smiling?

It is also a close call about whether Daniel Negreanu has shown one too many hissy fits to be considered best International Player of the Year; especially while gentlemen such as Marvin Rettenmaier and David “Bakes” Baker continue to be superb ambassadors for the game.

Voters do not have to vote in every category if they do not wish. It may be quite possible that the decision between two or more nominees is too difficult to make, or that the judging panel have made a glaring omission in a certain category (for example – why is “My Brain” not included in the category of Best Poker Software).

Neil Channing is up for three awards (Poker Personality, Best Blogger and Best Social Media) but does not have room in his lounge for three more awards. He did however tweet out Dale Philip´s appeal for a few votes in the Best Blogger category, so be cautious if Channing – a former bookmaker – starts taking bets on any of the other contenders.

Ultimately, the 2013 British Poker Awards will be distributed according to the wishes of the voting public, so do not waste this opportunity to have your say in this prestigious event and cast your votes today!

The results of the 2013 British Poker Awards will be announced in a special ceremony on March 3rd at PokerStars Live in London´s Hippodrome Casino. The Awards event will be hosted by Bluff Europe and attended by representatives from event-sponsors PokerStars and media partner Calvin Ayre. Usually there are plenty of celebrities from the world of live and online poker in attendance and tickets for the ceremony will be going on sale in the New Year (usually cost £20.00).