Paul Volpe is the overall leader in the WPT Borgata Poker Open Championship after amassing 231,850 chips on Day 1B of the $3,500 buy-in six day event. 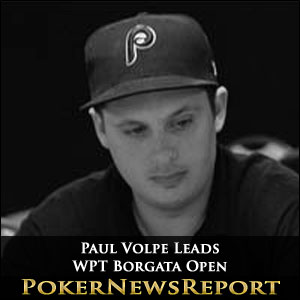 Paul Volpe is the overall leader in the WPT Borgata Poker Open Championship after amassing 231,850 chips on Day 1B of the $3,500 buy-in six day event.

Day 1B of the WPT Borgata Open attracted 813 entries (or re-entries), creating a total field of 1,189 from which 595 players will return to the Borgata Hotel and Casino later today in pursuit of the $825,099 first prize. At the top of the chip counts when the two Day 1 fields combine will be Paul Volpe, who got off to a cracking start during Level 4 of the event, when finding pocket Aces to best Patti Barsanti-Chou´s shove with pocket Queens. That hand enabled Volpe to chip up to 70,000 chips, and thereafter there was no stopping the former GPI Player of the Month.

Behind Volpe, local player Anthony Castelli finished Day 1B of the WPT Borgata Poker Open Championship with 210,100 chips, while Jeremy Stein – who final tabled the 2013 Borgata Winter Poker Open Main Event – bagged and tagged 206,100 chips after the eight levels of 75 minutes. All three players will have an advantage over Day 1A chip leader Cong Pham, who built up a stack of 191,025 chips on Sunday.

Plenty of big names travelled to Atlantic City to compete in the WPT Borgata Poker Open Championship event. Vanessa Selbst nursed her 30,000 chip starting stack into 80,000 chips and, after busting out on Day 1A, Event #19 winner Matt Salsberg jumped back into the action on Day 1B and survived with 64,075 chips. Former WPT Champions Scott Seiver (159,750 chips) and Kevin Saul (81,000 chips) enjoyed a fruitful day at the tables, although there will be no repeat WPT victory for Matt Waxman, who busted out in the last level of the night when it was too late to re-enter.

World Poker Tour founder Steve Lipscomb had to fire two bullets to sneak into Day 2 with little more than his starting stack (32,025 chips) while Hollywood legend James Woods, “fresh” from his second place in Borgata Open Event #20, finished the day with 46,000 chips – having reduced Kara Scott´s chip stack to 13,000 chips. Kara Scott´s Party Poker companion and WPT ambassador – Mike Sexton – failed to make it through to Day 2, and we will be hearing his words of wisdom from the commentary box when the event is televised later in the year.

When players assemble for Day 2 of the WPT Borgata Poker Open Main Event they will be sitting down to start Level 9 (blinds 300/600 – ante 75). The average chip stack is 59,949 chips and six levels of 90 minutes are scheduled to be played today. The top 100 players will cash in the Main Event, although it is unlikely that the money bubble will be burst before tomorrow.

Those with the best chance of collecting something for their efforts include (combined chip counts):-