Paul Volpe leads the WPT LA Poker Classic Main Event in the race for a million dollar payday after Day 5 concluded with an intriguing final table of six. 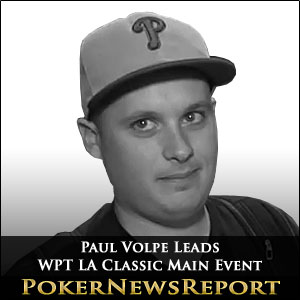 Paul Volpe leads the WPT LA Poker Classic Main Event in the race for a million dollar payday after Day 5 concluded with an intriguing final table of six.

Paul Volpe put himself in a good position yesterday to capture his first major live poker tournament after winning several decisive hands throughout the penultimate day of the World Poker Tour LA Poker Classic at the Commerce Casino in Commerce, California.

Volpe, who started the day in third place behind Day 4 chip leader Toby Lewis and Paul Klann, did have the advantage of more chips than any other player on his table but did not enjoy the best of starts – losing over 300,000 chips to Garrett Greer in an early hand after Greer got two streets of value out of Volpe when his 7♣ 2♠ flopped two pair.

Volpe lost further chips to Danny Fuhs and Naoya Kihara (twice) before rivering a flush to cripple Jeremy Ausmus, eliminating Gary Lent when Lent´s A♠ J♦ could not improve over Volpe´s 8♣ 8♥, and busting Alexander Venovski (J♦ J♥) when his A♠ 3♠ paired on the flop.

Once the tournament was reduced to one ten-handed table, Paul Volpe became more active – stealing blinds whenever possible with big pre-flop bets and post-flop raises, but the hand which took him into the chip lead was the last of the day.

Volpe got his revenge on Garrett Greer for the 72o hand earlier, when calling Greer´s A♦ K♠ shove from the small blind with 9♣ 9♦. The board ran 10♥ high and Greer was eliminated in seventh place, while Paul Volpe chipped up to over 4 million chips and has 83 big blinds going into the climax of the event.

Klann and Fuhs Close Behind

Paul Klann had enjoyed the chip lead for most of the day after taking a big three-way 1.3 million chip pot in the early proceedings with a full house Jacks over Fours. Klann was also responsible for sending Naoya Kihara to the rail in ninth (A♣ K♠ > 9♥ 9♠) and used his big stack to dominate the ten-handed final table tight up until Paul Volpe knocked out Garret Greer.

Danny Fuhs enjoyed the best of the day´s play. Starting 17th of the eighteen remaining players with only 16 big blinds, Fuhs enjoyed his share of good fortune to turn a gutshot straight against Paul Volpe and river a King to double up against Andrew Whitaker, but his leap into third position in the chip counts – and his biggest slice of luck – came with the elimination of David Tuthill in eighth.

After calling Tuthill´s 180,000 chip three-bet from the button, Danny Fuhs called Tuthill´s continuation bet of 165,000 chips after the flop of 10♥ 9♥ 5♠ and both players checked the turn card of 10♣. After the turn of 8♥ Danny Fuhs moved all-in. Tuthill tanked for 10 minutes before making the call with A♠ A♥, while Fuhs rolled over Q♣ J♣ for a rivered Queen-high straight.

Fong, Yaginuma and Lewis Hope to Make an Impact

The final three players at the final table are far from out of the running for the $1 million first prize. David Fong, Jesse Yaginuma and Toby Lewis have chips stacks worth 45bb, 25bb and 24bb respectively, but none of the three players had particularly active days – or failed to find any action when they needed it.

That was especially true for Day 4 chip leader Toby Lewis, who was seated in front of the aggressive Paul Klann until the tournament went ten-handed and then, when he had position on Klann, rarely got the opportunity to take advantage of it.