Raj Vohra snatched the chip lead in the third last hand of the night to head the 174 players who remain after Day 2 of the WPT Borgata Poker Open Main Event. 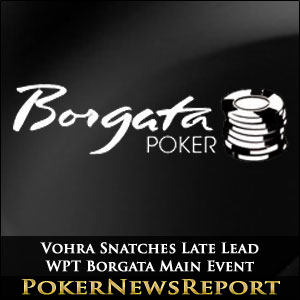 Vohra´s position at the top of the leaderboard came courtesy of a huge pot during Level 15 when, on a flop of 8♣ 6♣ 2♠, Vohra (A♣ 9♣) called Kunal Patel´s shove with Q♠ Q♦ and hit the club he needed for the nut flush on the Turn. Vohra´s win in that hand enabled him to chip up to 580,700 chips, around twelve big blinds ahead of Katayon Khaterzai (548,000 chips) with Edwin Torres one big blind further back in third (544,900 chips).

Volpe Not Off to the Best of Starts

591 players returned for Day 2 of the WPT Borgata Poker Open Main Event, and the action was fast and furious from the off. 69 players were eliminated within the first level of the day (Level 9 – blinds 300/600 – ante 75) – during which time overnight chip leader, Paul Volpe, suffered collateral damage to his chip stack when his flopped trip Aces lost to a rivered Spade flush.

Some players fared better during the early levels of the day – most notably Daniel Buzgon, who came into the day with just 23,700 chips, doubled up in the first hand of the day when his pocket Aces hit a set on the flop and then cracked Jonathan Little´s pocket Aces with pocket Jacks. Buzgon finished Day 2 with a well-above average chip stack of 314,300.

Ladies Have a Good Day

Ebony Kenney chipped up into fourth place when her Q♦ Q♠ was responsible for the dual KO of Corrie Wunstel (A♥ K♣) and Anthony Castelli (7♠ 7♦), and she was one of a number of lady poker players who enjoyed a good day at the tables. Vanessa Selbst (184,500 chips) still remains in contention after flopping two pairs with A♥ 5♠ to take a stack of chips from Kunal Patel (obviously before Raj Vohra took the rest) and Amanda Musumeci won a big flip against high-flying Jerry Wong (A♥ K♥ > Q♣ Q♠) to finish the Day with 309,000 chips.

James Woods in the Spotlight

One of the major talking points of the day was Hollywood actor James Woods´ elimination from the WPT Borgata Poker Open Moan Event. Woods had been running well – although a little fortunate to double up K♣ 2♣ > K♠ Q♦ with runner-runner two pairs early in the day, but his stack took a huge knock (A♣ 10♣ > 10♥ 10♦) when his opponent hit a runner-runner flush after the dealer had flashed the 9♦ when dealing and replaced the card with one of the clubs

Woods called the floor and queried the action with tournament director Tab Duchateau who, after speaking with other players at the table confirmed it was the correct action and Woods accepted it. Unfortunately James Woods was soon out of the tournament when his A♥ 8♥ fell victim to John Racener´s turned set of Queens – although he had one more performance to give to the table by ostentatiously stealing Racener´s Q♥ to complete his flush draw.

When play resumes today for Day 3 of the WPT Borgata Poker Open Main Event, the 174 players will be entering Level 16 (blinds 1,500/3,000 – ante 400) and play is scheduled to continue until just 27 players remain. Only the top 110 players will cash in the event, so the early levels are expected to be a bit cagey. However, once the money bubble has burst, we can expect fireworks to commence.

Those in the best position to light the touchpaper include:-

In other WPT News …

During Level 11 of Day 2, WPT President Adam Pliska announced that the World Poker Tour will be moving the WPT World Championship out of Las Vegas for the first time in WPT history and it will now take place at the Borgata Hotel and Casino (in Atlantic City) in the Spring of 2014.

The switch surprised many, but the reaction was generally favourable, as Party Poker (who aim to launch BorgataPoker.com in New Jersey this autumn) have also been named as the event sponsors and therefore it is likely that they will be hosting online qualifiers into the $25,000 buy-in Championship Event in good time for plenty of players to satellite their way into the tournament.