Geshkenbein secured the chip lead after Day 1a of the €5,000+€300 buy-in main event at the EPT Berlin, with his stack just beating out second-placed Jens Weigel. 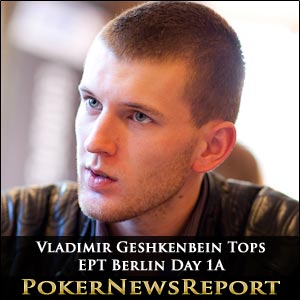 The Regensdove player – who shot to fame after collecting $266,705 for winning the Asia Pacific Poker Tour (APPT) HK$88,800 buy-in No-Limit Hold’em High Roller event in Macua back in late August of 2009 – holds 201,600 chips, while Rodenbach’s Weigel is just two thousand behind on 199,600 for what is the penultimate leg of the EPT’s eighth season.

Certainly, Weigel is in a good position to improve on his best EPT finish, when he took 30th place for $24,906 from the same event last April, although that isn’t in fact his biggest cash. That arrived when the German finished in 373rd place at the 2010 World Series of Poker (WSOP) main event in Las Vegas for $36,463.

A healthy 243 players began the Berlin tournament, although just 110 made it into tomorrow’s Day 2 following 10 60-minute levels of play at the lavish Grand Hyatt Hotel in Germany’s capital city.

However, the highly-entertaining Geshkenbein had to battle back from a poor start to the opening flight after dropping down to just 15,000 chips, before rallying to end the day on top – much like he did when winning last year’s EPT SnowFest €3,500 buy-in No-Limit Hold’em main event in Hinterglemm’s Alpine Palace Card Casino for $552,901.

The Russian pro staged an incredible comeback, at one point cracking ace-king with ace-queen along the way – although he did slip back a little as Day 1a came to a close before again taking down several pots to take the chip lead.

We can’t recommend this, but Geshkenbein certainly enjoyed himself yesterday, drinking copious amounts of vodka – with bitter lemon, in case you’re wondering – while having his lucky mascot, a toy monkey, alongside him.

No matter the ‘benefits’ of knocking back some of the hard stuff, the Russian will undoubtedly be one to watch as he aims to secure his biggest win since that event in Austria last March – particularly as he hasn’t cashed since finishing 106th for $54,851 in the $10,000 buy-in No-Limit Hold’em World Championship in Vegas back in July last year.

They will all be aiming to emulate Wilinofsky’s success from last year, when the Canadian pocketed $1,174,143 after outlasting a 773-player field, with organisers adding the nearby Spielbank Berlin to ensure that the expected 1,300 competitors can be accommodated.